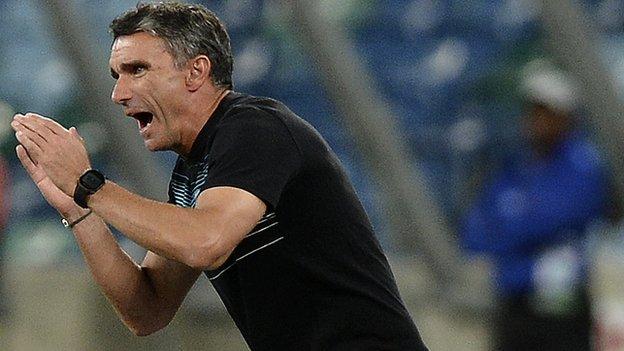 Mali coach Patrice Carteron says his side are underdogs in their Africa Cup of Nations semi-final against Nigeria, even though they lead the Super Eagles in the Fifa world rankings.

The Eagles are 25th in the world and third in Africa, while Nigeria are 52nd on Fifa's list and ninth in Africa.

Carteron told BBC Sport: "Nigeria beat Ivory Coast, who everyone had thought would win that game.

"Now everyone thinks Nigeria will win the cup, so the pressure is on them."

"But we have the faith and we are so motivated because we want to give so much to the Malian people.

"This semi-final is not the end; it is the start of something."

Carteron revealed that Mamadou Samassa, the goalkeeper who was suspended for the quarter-final against South Africa, will return to the starting line-up for Wednesday's game.

That is despite the heroics of his replacement, Soumalia Diakite, who pulled off two saves in the penalty shoot-out to see Mali through to the last four.

Mali against Nigeria is the first semi-final, and kicks-off in the Moses Mabhida Stadium in Durban at 1500 GMT on Wednesday.