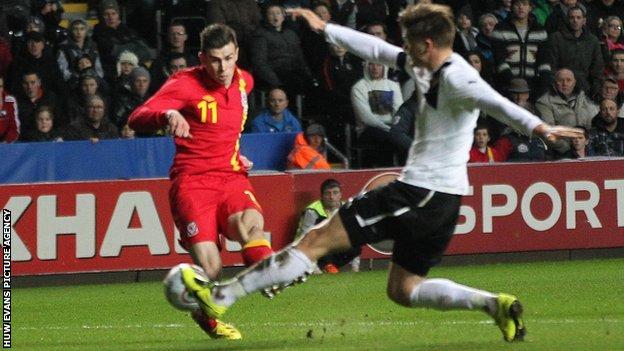 Gareth Bale inspired Wales to only their second win in seven games under manager Chris Coleman by beating Austria in a friendly in Swansea.

The winger drilled the opener low into the corner after cutting in off the wing for his fourth goal in four games.

Wales were lucky to reach half-time ahead as Boaz Myhill was tested.

Bale then crossed for substitute Sam Vokes to head Wales' second, and the home side held on despite Marc Janko's header for the often superior visitors.

It was far from a convincing victory or performance from Wales, who struggled to trouble the visitors with any semblance of sustained pressure by failing to keep possession.

But victory should at least restore some confidence for a side who had lost six of their last seven as they head for next month's World Cup qualifying double-header away to Scotland and home to Croatia.

Having managed just three goals in his previous six games in charge, Coleman hoped the combination of Bale, Craig Bellamy and Aaron Ramsey together for the first time during his tenure would inject greater attacking threat into his ailing side.

That prospect was snatched away on the morning of the match when Arsenal midfielder Ramsey returned to his club for treatment on a calf injury.

But Bale was on hand and the Tottenham Hotspur star once again demonstrated how heavily Wales depend on his pace to provide meaningful penetration.

Wales lined up with an unfamiliar formation with Bellamy the lone striker, with Jack Collison providing support on the left flank and Bale on the right.

Austria, cheered on by fewer than 50 supporters tucked away in one of the corners behind the goal, arrived in Wales with one win in their last 17 away games.

But they warmed to their task quickly on a bitterly cold night, going close twice in the opening 10 minutes.

First Adam Matthews cleared off the line as Ashley Williams diverted the ball towards his own goal from a corner before Myhill palmed away a 20-yard drive from Andreas Ivanschitz.

Bale gave first notice of his pace and power by surging past Markus Suttner, and the Austria left-back was caught on his heels once more for Wales' opener on 21 minutes.

Joe Allen's lofted ball released Bale down the right flank and there was a certain inevitability in the accuracy of the finish as the winger cut in onto his left foot and drilled the ball into the bottom corner for his 10th international goal.

The visitors proceeded to dominate the remainder of the first half and a combination of bad luck and poor finishing denied them a deserved equaliser.

A generous off-side call first saved Wales as the unmarked Emanuel Pogatetz headed in from five yards. The decision was given against Janko as he headed the ball back towards goal from the far post.

Ivanschitz wasted a great chance in front of goal after Myhill palmed away a fierce drive from Marko Arnautovic.

One of many superb set-piece deliveries from Arnautovic set up another chance as Myhill was again called into action to save from Sebastian Prodl's header.

Myhill was then almost caught out by an audacious 35-yard attempt from Alaba that hit the foot of the post. Moments later, a last-ditch sliding tackle from Sam Ricketts denied Aston Villa's Andreas Weimann.

Wales returned from the welcome break without Bellamy and David Vaughan, replaced by Vokes and Andy King.

And Vokes wasted little time in justifying his introduction by doubling Wales' advantage.

Bale again found himself behind the Austria defence and his cross gave was powerfully met by Vokes to score his fifth goal for Wales.

The home side looked vulnerable all night from crosses and this time there was no escape as captain Janko buried his header to halve the deficit with 15 minutes remaining.

Having delivered the cross that went over the head of Williams for the goal, Arnautovic then went close with a deft curler that had Myhill scampering.

Austria continued to press for the equaliser, but Wales survived without much alarm to secure their second successive friendly win at the Liberty Stadium, the venue for next month's qualifier with Croatia.