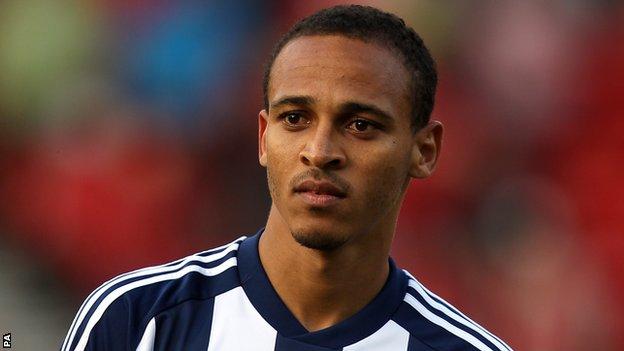 Odemwingie arrived at QPR's Loftus Road ground on transfer deadline day, despite no fee being agreed.

The 31-year-old Nigeria international striker has accepted his punishment and will resume full training.

Odemwingie said he apologised "to the club and our supporters for any distress I have caused".

The Uzbekistan-born forward added: "I understand how my actions have been viewed. I want to reassure everyone at the club and our fans that I will continue to give my all whenever I am selected.

"We have enjoyed a good season so far and I aim to play my part in keeping the club as high up the table as possible."

Albion chairman Jeremy Peace said Odemwingie "has accepted his punishment and promised to comply with all club regulations".

Peace added: "This has been an extremely difficult time for the club and it was imperative that we dealt with such a serious matter both fully and correctly.

"Peter has apologised for his conduct to me personally and the club and our supporters as a whole."

Albion revealed on the final day of the January transfer window that talks with Rangers over Odemwingie, who had been the subject of an unsuccessful R's bid of about £3m earlier in the month, had continued, but that no agreement was reached.

Last week the Nigeria international was told not to return to training until after the weekend, and he was left out of the squad that lost 1-0 to Tottenham on Sunday.