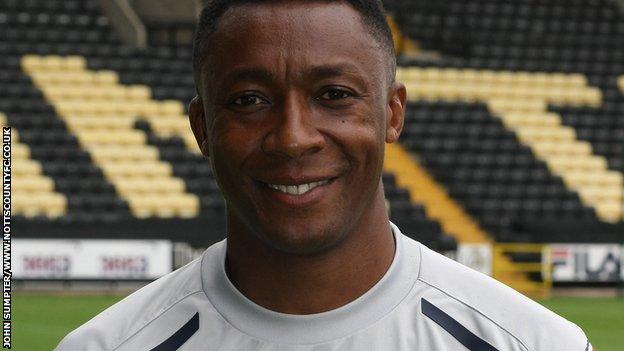 County's development squad boss, 43, was put in charge of the first team on Sunday after Keith Curle was sacked less than a year since being appointed.

Rodwell told BBC Radio Nottingham: "It is his job to lose.

"He stands the very best chance because he is in the hot seat. The dream is that it is a long-term appointment."

Rodwell continued: "Every chairman who has ever appointed a caretaker manager in the history of football desperately wants to give the job to the caretaker because you know what you are getting when you take them on.

Kiwomya is likely to have at least two games to impress, Tuesday's trip to Stevenage and next Saturday's home game against Crewe, but Rodwell would not commit to any timescale on the appointment of a seventh manager since Ian MacParland left the club in October 2009.

"I'll ask players for commitment, because there will be an emotional effect as Keith was very popular with them."

Improving the club's home form, described as "nothing short of awful" by Rodwell, will be a major priority for whoever is given the job next.

Curle oversaw a remarkable 22-game unbeaten run away from Meadow Lane, which came to an end on 26 January, but results on home soil were far from satisfactory.

"To lose nine games at home and get dumped out of all three (cup) competitions with barely a whimper at home is something to be considered.

"We have done very well away from home, and it is an excellent record that everyone can be proud of, but frankly I would have liked to turn that around and had that record at at Meadow Lane and lost the games away," said Rodwell.

"The simple fact is that we derive a lot of our income from those people that come to watch football matches."

Former Ipswich, Arsenal and Queens Park Rangers striker Kiwomya only agreed to take over after receiving Curle's blessing, but is now determined to prove he is ready to make the step up.

"Keith was fine, he was obviously still hurting a little bit and disappointed as any manager would be," he said.

"I'm grateful to the club that they see that I can do that job, because there will be a lot of people that will throw their hats in with more experience.

"My job now is to take over for a short period of time and let the board do what they need to do - I will just try keep the ship going forward.

"I'll ask players for commitment, because there will be an emotional effect as Keith was very popular with them."