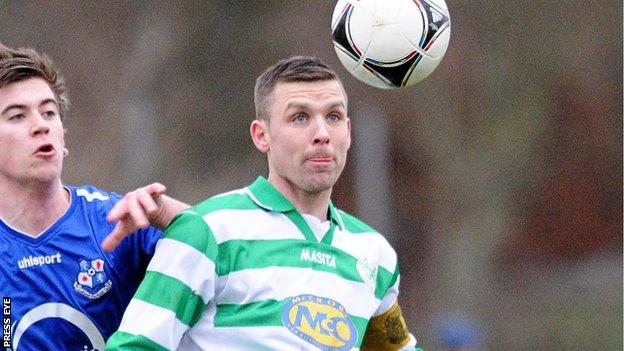 Three goals late in the first half sent Lurgan Celtic on their way to a 4-1 victory away to Larne in Monday's Irish Cup fifth round replay.

Larne's James Braniff had just been sent-off for raising his hands to an opponent when Raymond Fitzpatrick headed in from a free-kick.

Niall Lavery then netted a penalty and Damien McParland made it 3-0.

In the second half, Lavery converted another penalty while Gary Workman fired in a consolation for Larne.

Lurgan Celtic will play fellow Championship Two side Knockbreda Parish in the sixth round - the winners going into the quarter-finals.

Before the red card, Lurgan had been the better team but the dismissal of Braniff, who was starting his first game for the Championship One side, was the signal for the visitors to take total command.

The red card incident led to the free-kick from which Fitzpatrick headed past keeper Chris Keenan.

Larne quickly fell further behind when keeper Keenan's foul led to a penalty which Lavery converted.

The Inver Park men were as good as out when Celtic added a third just before the break.

Keenan could only palm away a shot from Lavery, leaving McParland to extend the lead with the follow-up.

Celtic added a fourth on 73 minutes, again through a Lavery penalty after Niall McAllister had fouled Fitzpatrick.

Workman fired home a spectacular shot a minute later but it was the visitors who deservedly earned the right to entertain Knockbreda in the last 16 on Saturday.