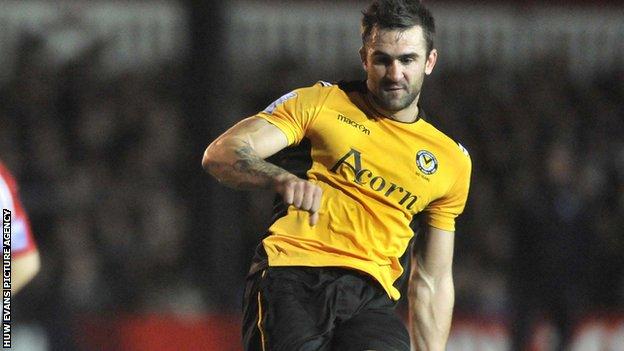 Newport moved up to fourth spot in the Blue Square Bet Premier with a hard-fought victory over Mansfield Town.

Winger Andy Sandell scored his sixth goal of the season with his 66th-minute penalty to set up County's 16th league win of the season.

Forward Christian Jolley was fouled by Mansfield defender Lee Beevers and Sandell converted from the spot.

Jolley then scored his sixth goal of the season in the 78th minute to secure victory.

This victory for the Exiles, who were held to a 2-2 draw by Tamworth on Saturday, was their first at home for two months and keeps them in the play-off places.

Mansfield saw their recent run of four victories ended by the Welsh side at Rodney Parade.

Newport County manager Justin Edinburgh told BBC Radio Wales: "I'm not sure many people would have expected that [win], but I am delighted.

"We deserved to win, there is no doubt about that. I thought we were worthy of the win. We had a strong mentality, looked very accomplished at the back and had good work-rate.

"We have been in the top three or four all season, we are a good side, and we have had a little bit of a rough patch of late but to maintain where we are during it shows what a good side we are."