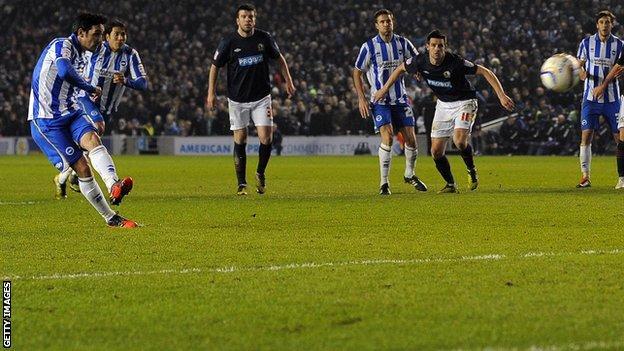 A second half Vicente penalty helped Brighton secure a point at home to Blackburn in the Championship.

Rovers took the lead with a powerful header from Scott Dann in a first half otherwise dominated by Brighton.

Martin Olsson was adjudged to have handled a Vicente cross after the break, giving the Brighton winger the chance to equalise from the spot.

Neither side could seal three points, with Kazenga LuaLua the closest to getting the winner.

It was the second 1-1 draw between the two sides within three weeks, and the result, together with Middlesbrough's win over Leeds, leaves Brighton and Blackburn further adrift of the play-off places.

The two sides exchanged chances in an exciting opening spell, with Dean Hammond and Leonardo Ulloa going close for Brighton within the first 60 seconds.

Vicente and Will Buckley could also have given Brighton the lead, while the visitors saw both DJ Campbell and Bruno Saltor shoot narrowly wide, all before 12 minutes were on the clock.

The hosts continued to dominate until, against the run of play, Dann rose to head home a Danny Murphy corner to give Blackburn the lead.

Brighton still had the upper hand, and Dean Hammond had two chances in quick succession in stoppage time, forcing Jake Kean into a fine block before heading straight at the Blackburn keeper.

The home side drew level 12 minutes into the second half when the assistant referee flagged for a penalty for handball against Olsson. Following protests from Blackburn, Vicente stepped up to drill the ball straight down the middle.

Chances were few and far between following the equaliser, with LuaLua wasting the best chance for the home side deep into stoppage time.

View from the dressing rooms

Brighton manager Gus Poyet: "In terms of technical ability, speed and precision we were absolutely spectacular.

"That for me was enough. The [admission] money was worth it already.

"We'll try for the play-offs and won't give up. The players want it and the club wants it."

Blackburn Rovers manager Michael Appleton: "The penalty was a bit harsh as the ball hit Markus Olsson's thigh before it went to his hand.

"Before that, Adam El-Abd made the best save of the night [after appearing to handle the ball]. It was very disappointing. But six or seven weeks ago we would have lost a game like that 4-1 or 5-1. There's more about us now.

"We had to deal with a lot of balls in the box and we showed a lot of steel."