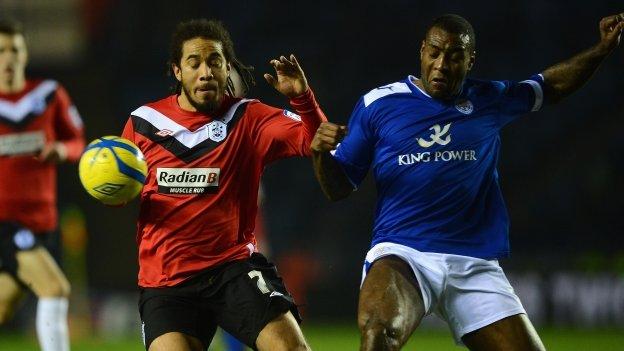 Huddersfield will face Premier League Wigan in the FA Cup fifth round after Sean Scannell's solo winner upset Leicester in their fourth-round replay.

The Terriers took an early lead though Adam Clayton's fierce free-kick, but were soon pegged back by the home side.

Michael Keane slotted home after seven minutes and his side were on top until Scannell's weaving run and shot.

Huddersfield announced during the match that they had been given permission to talk to Coventry manager Mark Robins.

Their managerial post has been vacant since Simon Grayson's sacking on 24 January.

If it is to be the final match of Mark Lillis's caretaker spell in charge of Huddersfield, then overcoming a Leicester side who dispatched them 6-1 at the King Power Stadium on New Year's Day was a fine way to sign off.

Both FA Cup meetings have been far closer-fought affairs and Huddersfield's advantage from Clayton's free-kick lasted a little over two minutes.

His thunderous strike, the first shot on goal of the game, flew past a sluggish Kasper Schmeichel from 35 yards, but was cancelled out by a more workmanlike effort almost immediately.

Ritchie de Laet's header from an Anthony Knockaert corner was blocked, but not cleared, by Alan Lee and Keane poked home his first goal since joining on loan from Manchester United.

The rest of the first half failed to live up to a furious start with Leicester's Paul Gallagher half-volleying wide from distance before Scott Arfield swiped a shot over the top from distance at the other.

Leicester had enjoyed the majority of possession before the break, with French playmaker Knockaert looking particularly lively.

They began to turn possession into clear-cut chances after the break as David Nugent nodded into Ian Bennett's gloves and Marko Futacs miss-kicked in the penalty box.

Huddersfield's counter-attacks were rare but dangerous and Scannell set up Arfield for a snap shot before his own strike sealed the game.

The winger shrugged off the attentions of Keane and Paul Konchesky as he cut in off the byline and slipped a shot between the legs of the advancing Schmeichel.

Substitute Jamie Vardy came closest to finding a second equaliser, but the expected onslaught never gathered any momentum as Huddersfield retained the ball, ran down the clock and booked their place in the next round.

Leicester boss Nigel Pearson: "We were not good enough in both boxes. That is what cost us. We should have avoided giving away the free-kick for the first goal and were then caught on the counter-attack to concede the second. We were not clinical enough in their penalty area when we had our chances.

"We are disappointed to be out of the FA Cup but I have got a lot of faith in this group of players. The league has always been our priority but I would still have preferred to go through tonight."

Huddersfield's caretaker boss Mark Lillis: "This was a fantastic evening for the club. The big thing was to get the lads into the dressing room at half-time and make sure they continued to believe in themselves. That was the big word - belief.

"It is great to be in the fifth round of the FA Cup and at home, and it will be great to pass it on to the new man if he is here. We have had a lot of adversity since I came into the job three weeks ago and we had a young side out there tonight, but they did us proud."