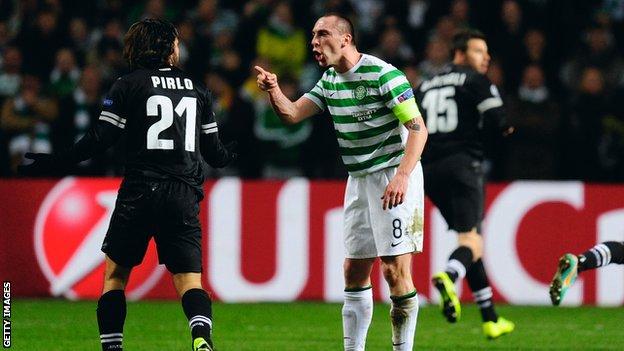 Celtic were given a harsh lesson in Champions League knockout football by the old masters of Juventus.

Brimming with confidence on the back of some tremendous European performances and results, Neil Lennon's Celtic were picked off ruthlessly.

Alessando Matri put the Italian side ahead in the opening moments, taking advantage of poor defending.

Two late goals from Claudio Marchisio and Mirko Vucinic ensured the return leg will surely be a formality.

Celtic were unable to lift themselves to the heights of the wins over Barcelona and Spartak Moscow in the group stage, although despite conceding an early goal they were dominant for large periods of the last-16 tie.

And as the match moved into its latter stages it was the Scottish team who looked most likely to score again before Juve twice more picked off their tiring opponents to take a firm grip on the contest.

Celtic midfielder Victor Wanyama sent a blistering shot goalwards with only a minute played, which Gigi Buffon turned round the post, as the Scottish side looked to capitalise on their passionate home support.

Efe Ambrose - straight back in the team after featuring in Nigeria's Africa Cup of Nations success on Sunday - was caught underneath the ball and Matri was able to nudge him aside to slide it through Fraser Forster's legs and over the line, despite Kelvin Wilson's efforts to keep it out.

Celtic's response was to pepper Buffon's goal with shots from outside the box, with the Italian dealing well with efforts by Wanyama and Kris Commons, who also sent a wonderful overhead kick narrowly wide.

But for all their pressure, Celtic did little to truly threaten the Italian goal, while the crowd grew restless as a result of the referee's perceived unwillingness to give decisions in their side's favour, with grappling in the penalty area rarely punished.

Juve, for their part, looked happy to soak up what Celtic had to throw at them and play on the counter-attack.

The home team's first clear view of goal came with more than an hour on the clock, but when it did materialise it should have brought about the equaliser.

Charlie Mulgrew's curling cross provided Ambrose with the ideal opportunity to atone for his earlier misjudgement, but his header was weak and straight at Buffon.

Celtic were then taught a lesson in incisive football when they fell further behind.

The deftest of touches by Matri found Marchisio, who twisted in from the left of the penalty area to stroke the ball beyond Forster.

Marchisio was heavily involved as Juventus effectively killed the tie with a third goal, putting the ball on a plate for Vucinic to beat the keeper from close range after Ambrose was again at fault and caught in possession.

Juventus sparkled only in flashes, but they did so brightly enough to record an ultimately commanding victory, with Celtic now heading to Turin looking to retain the respect already attained on this season's run.