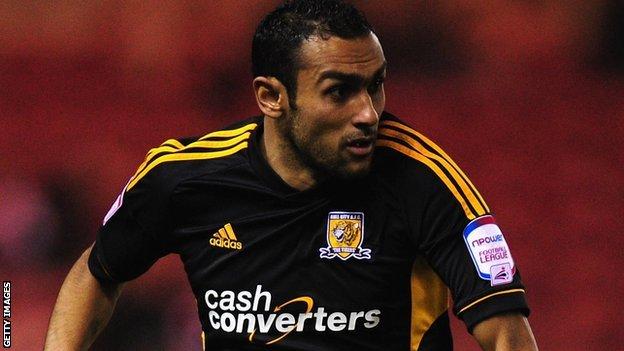 After a poor first-half display, Hull took the lead shortly after the break when substitute Gedo headed home with just his second touch of the ball.

But Elmohamady fired in from a corner before Derby's Gareth Roberts was sent off for a lunge on Nick Proschwitz.

It was a miserable end to an evening that began promisingly for a Derby side that enjoyed the better of the early exchanges.

They could not make their pressure count through as Conor Sammon poked wide and a last-ditch tackle by Jack Hobbs barred Ward's way to goal.

Egypt international Gedo's header was more precise as he nodded Robbie Brady's delivery back across the Derby goalkeeper for the opener.

The Egyptian came close to a second with a volley just over, but Derby pressed forward and Sammon thumped the underside of the bar before almost inadvertently turning in Ward's effort.

Ward's industry was rewarded when Stockdale spilled Craig Bryson's cross to gift him a simple tap-in.

But Derby were again undone in the air as Elmohamady converted from another Brady delivery before Roberts was dismissed and Proschwitz picked himself up to miss a fine chance to make the game safe.

Hull manager Steve Bruce: "The boy Gedo showed his class. He's an international footballer and I think he's got 19 goals in 30 games so we know he has got quality.

"A big credit goes to the chairman. He's worked wonders to get him here.

"I didn't think it would be possible to get two international footballers on loan, and Ahmed Fathi will be a big player for us too."

"It would have been a thoroughly deserved point. It was a very good away performance at one of the favourites for promotion and I can't ask any more from our players whatsoever.

"That's two major decisions in four days that have gone against us.

"We don't usually appeal these things unless it's blatantly obvious, so I don't think we will be, but it certainly wasn't intentional."