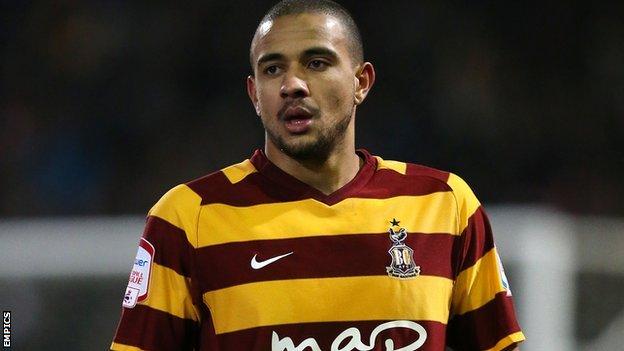 Bradford City full-back James Meredith is hoping to make a return to full training next week as he recovers from glandular fever.

The 25-year-old Australian has not played since the 0-0 draw with Morecambe on New Year's Day.

Boss Phil Parkinson was concerned he could miss the rest of the season after being admitted to hospital.

But Meredith told BBC Radio Leeds: "I'm hoping to get the all clear from the doctor on Monday."

He continued: "I was in an absolute state. I couldn't walk, I was rambling and I was struggling to speak and see. I was sleeping 15 hours a day and even though I'm better now I still need the physio to call me in the morning because my alarm clock doesn't wake me up.

"The club and the fans thought I was going to be out for six months so it could have been much worse.

"Hopefully I can be back next week and then I'll build from there."

The Bantams take on Swansea City in the League Cup final on Sunday, 24 February after a stunning run that has seen them knock out Premier League sides Wigan, Arsenal and Aston Villa.

In contrast to their cup form, they have picked up just two points in their last five League Two games and are currently five points outside the play-off places.

The former York man is eager for the club not to lose further ground in the promotion race.

"In my eyes the league is the most important thing and the run we're on at the moment isn't good enough," he added.

"There has been a distraction because of the cup and if I'm honest I'm not a fan of any cup competition because your bread and butter is the league.

"The most important thing for us is getting up."

Bradford host high-flying Gillingham on Saturday before back-to-back away games at Wycombe and AFC Wimbledon.