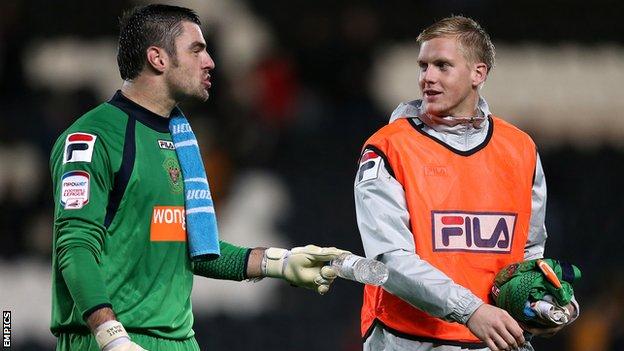 Mark Halstead is eager to make the most of his opportunity when he makes his first league start for Blackpool against Millwall on Saturday.

The 23-year-old has been the regular deputy to first-choice goalkeeper Matt Gilks at Bloomfield Road this season.

But Gilks will serve a one-match ban after being sent off against Barnsley.

"It will be nice. I just need to prepare right. Hopefully I can take my chance and I can show what I can do," Halstead told BBC Radio Lancashire.

Mark came in and did fantastic [on Saturday]. He'll have his opportunity now

He replaced Gilks in goal on Saturday after the former Rochdale keeper was dismissed for handling outside the penalty area, but Halstead was unable to prevent the Seasiders

Halstead's only two starts for the club have come in the League Cup, and having patiently waited for a chance in the first-team he is keen to perform well.

The former Stockport County, Kettering and Barrow loanee continued: "I prepare the same as he [Gilks] does, apart from on a matchday. We always do the same training during the week.

"I always think I'm ready. I always prepare as if I am playing."

Caretaker manager Steve Thompson said he would have qualms about starting Halstead, adding: "Mark came in and did fantastic [on Saturday]. He'll have his opportunity now."