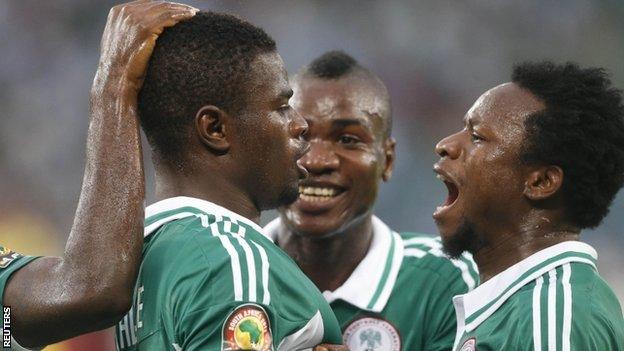 Nigeria eased through to their first Africa Cup of Nations final in 13 years with a comfortable victory over Mali.

The Super Eagles made it three with Emmanuel Emenike's shot deflecting in off Mali midfielder Momo Sissoko.

Three of Nigeria's goals came in the first half, overwhelming a Malian side, who would be forced to settle for a place in the third-place play-off for the second year in a row.

Closing in on number three

Stephen Keshi's side, meanwhile, progress to their first final appearance since 2000, seeking to end their 19-year wait for a third Nations Cup title.

The confident-looking Super Eagles moved the ball around well from start, with Moses unleashing the first shot from 25 yards, which flew well wide.

Mali's first attacking threat came through Adama Tamboura, who burst forward well into the box, before his pull-back was cut out by Godfrey Oboabona. Defender Molla Wague then headed well over from the resulting corner from 10 yards, when he should have done better.

Nigeria's first real chance of the game came from a John Obi Mikel ball over the top, which striker Brown Ideye attempted to slip past keeper Samassa, only for the reinstated Malian keeper to deny him with an outstretched boot.

Mikel then lashed in a dangerous shot from 25 yards, which flew just past Samassa's post.

It served as a warning sign for what was to come, as Nigeria broke the deadlock with a goal created by the influential Moses.

The Eagles will contest their second play-off game in two years, as they failed once again to progress to their first final since 1972 - which they lost to Congo

The Chelsea midfielder turned the Malian defence inside out with some good skill to cross brilliantly for Echiejile, who stooped to head home unmarked at the far post.

The Super Eagles made it two just minutes later, with Emenike breaking forward down the right again and laying the ball into the path of Ideye, who bundled in past Samassa at close range.

Mali, rattled by Nigeria's two quick-fire goals, tried to play themselves back into the game but to no avail, as Emenike made it three just before the break.

A free-kick laid off to the striker took a massive deflection off Sissoko in the wall, wrong-footing Samassa and creeping in just inside the keeper's left-hand post.

The stunned Malians emerged in the second period with a mountain to climb and captain Seydou Keita could have got one back right at the start of the half, finding space in the box but firing wide from eight yards.

The Nigerians continued to press and substitute Ahmed Musa, who had replaced Moses minutes earlier, beat the offside trap and fired home under Samassa's body to put them out of sight.

Musa thought he had made it five, when he found the net from close range once more, but the goal was disallowed for offside.

Striker Cheick Tidiane Diabate tried to salvage some Malian pride with a shot at the near post, which was smothered by Enyeama, before striker Mahamadou Samassa's close-range effort was palmed away by the Maccabi Tel Aviv keeper.

Substitute Diarra then grabbed the consolation for the Malians, stroking home into the corner, after some good work on the left by fellow replacement Diabate created the opening.

Diarra almost grabbed a second in injury time, but saw his effort curl just over Enyeama's bar, as the dejected Malians moved on to Port Elizabeth for Saturday's play-off, while the resurgent Nigerians progressed to Sunday's final in Johannesburg.

"Mali are a good team with a top player like Seydou Keita.

"But they are not very fast at the back and we took advantage of this to score our first two goals."

"I'm still proud of this team.

"We worked hard even though we did not reach the final."