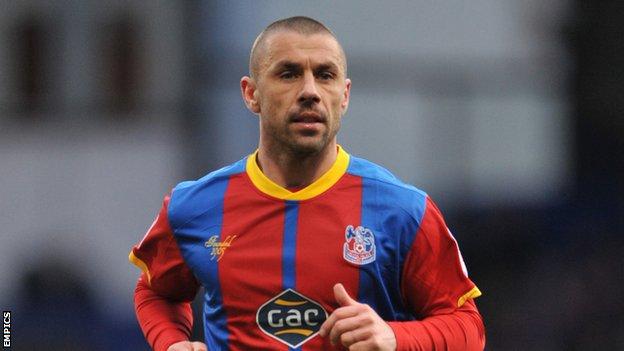 Crystal Palace striker Kevin Phillips says he wants to repay manager Ian Holloway for bringing him to the club.

The 38-year-old joined the Eagles on loan from Blackpool on deadline day.

He told BBC London 94.9: "I don't want to let him down. He's brought me here and I want to repay the faith he has shown in me.

"There was not a lot of people out there willing to take a chance - not just now, but at the beginning of last season as well."

Phillips previously worked with Holloway at Blackpool, after the former Sunderland and West Brom forward moved to Bloomfield Road on a free transfer at the start of last season.

"I managed to repay him [at Blackpool] last season with 17 goals and we nearly did it in the play-off final," Phillips said

"I don't want to let him down from now until the end of the season.

"Every time I pull on a Palace shirt or a training kit I will give 100 percent and I thoroughly look forward to it."

Phillips, who scored two goals in 19 appearances for Blackpool this season, said it was an easy decision to move to south London.

"My life at Blackpool was probably just fading out as they made it pretty clear they needed me off the wage bill and wanted me out so they could bring someone else in.

"The gaffer [Holloway] got in touch with my agent and once I had a good think about it, it made sense.

"Palace are an exciting team, I enjoyed working under him at Blackpool and I really look forward to working with him from now until the end of the season."

Phillips made his debut as a substitute in the 2-1 win over Charlton at Selhurst Park last Saturday and was impressed by fellow striker Glenn Murray, who hit both of Palace's goals.

"Glenn is a fantastic player and one I have watched a lot this season.

"When I knew I was coming I was excited to see him in the flesh and he didn't disappoint on Saturday," he added.

"He wasn't involved in everything but what he does do - putting the ball in the back of the net - he does very well. It was superb finishing."