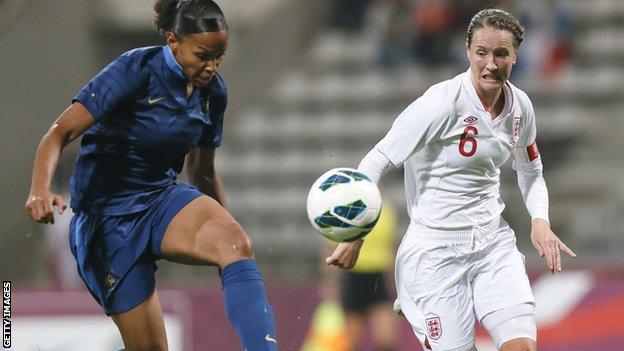 England and Lincoln Ladies captain Casey Stoney will be writing regular columns for the BBC website during the coming season.

The 2013 campaign promises to be an exciting and important one for women's football, with England set to participate in Euro 2013 as well as the third season of the FA Women's Super League, which starts in April.

The tough road to the top

The women's game became semi-professional two seasons ago so I'm financially better off than I ever have been, but it has been a rocky road to get here.

When I started my career at Arsenal Ladies in 1999, I used to do the laundry to help me earn a living. That meant I was washing Dennis Bergkamp's underwear when he did a double training session.

When I was employed as a coach at the David Beckham Academy, I used to get up at 4.30am to train before work and I had to use all my holidays to play at the 2007 World Cup for England.

And then when I played at Chelsea, despite the club's riches, it felt like the ladies' team were bottom of the pile.

One episode summed it up when John Terry stepped in to pay for our tracksuits because the club would only give us the hand-me-downs from one of the academy teams.

That did us the world of good, but that situation told me Chelsea didn't take women's football seriously enough.

Then the club said during the 2009 European Championship that they wanted me to be player-manager. I did my best but, at 27, I wasn't ready for that. So, eventually, I left for Lincoln in 2011, where I am captain and where I feel happy.

The best season of my life?

Last year was quite simply the best season of my life; I became England captain, took part in the Olympics and was named the Football Association's international player of the year.

"After a recent pay increase for England players, and my salary from Lincoln, I have never been better rewarded. But like many male players will tell you when they sign a new deal for £50,000 a week, it is only a short career.

"You have to accept that when you are a footballer, you are effectively unemployable and in a few years' time I will have to start my career again. I now regret giving up my A-levels to focus on football when I was younger and I didn't get a chance to go to university.

"I have taken my coaching badges so hopefully I can fall back on that, but I haven't got any other qualifications. My fear is that I could still end up stacking shelves in Tesco!"

It made me feel like all the hard work had paid off.

I remember waking up the day after we beat Brazil in front of 70,000 fans at Wembley and asking my Great Britain team-mates if it was real. It all felt like a dream that you didn't want to end.

But it wasn't all joy and happiness. Three days after the win over Brazil our campaign came to a crashing halt when we lost to Canada in the quarter-finals.

Over the course of the season, you will find that I'm not very good at losing. My family say they will only play board games with me so long as I don't sulk! And when I was playing my god-daughter at table tennis recently, I had to change the rules from winner-stays-on, so I could leave the table. It's ridiculous really.

But in the Olympics it went to another level. I didn't think the loss to Canada would affect me so much but I was convinced we could get to a medal match, maybe even win gold.

After the match, I was so gutted that I couldn't return to the Olympic Village so I drove straight home to Lincoln, sat on the sofa and cried and cried. I couldn't even watch the Olympics on TV.

Everyone in the nation was watching the best day of the Olympics on Super Saturday but I was sat there watching Family Fortunes instead. I just couldn't turn over.

The next day I drove straight to France for 12 days to get my head clear. It was almost like a hibernation period and it got me back on track, thankfully.

Bouncing back from rock bottom

Until that defeat at the Olympics, my lowest ebb had come when I wasn't picked for the 2005 European Championship in England.

I nearly quit international football because of it but, looking back, it has served as a catalyst. Sometimes you have to hit rock bottom to climb your way out of it and it gave me more determination than ever to fight my way back into the team.

I've always been quite driven, sometimes too driven; it is quite an internal thing with me.

When I was about six, my mum and dad divorced. Mum was left to bring up my brother and me, and even though she had three jobs, we struggled financially. My home life wasn't great so I just focused my energy on football.

I just loved playing. It was 90 minutes where I didn't have to think about anything else. Even now, if I've had a rubbish day I will go out for a run and always feel better.

When we moved to London, my mum made me join a boys' team and I dreaded it. In the first match I don't think I touched the ball for the first half hour but then decided to get the ball off one of my team-mates and off I went on a mazy run.

I absolutely loved it and that season I won players' player of the season, which is still a massive highlight for me.

At 12, I joined Chelsea for the first time and although most of my family support them, I had no regrets about leaving Chelsea for Lincoln in 2011.

I want Lincoln Ladies to be the best club it can be and even if I were offered more money elsewhere I'd rather stay where I'm happy and comfortable.