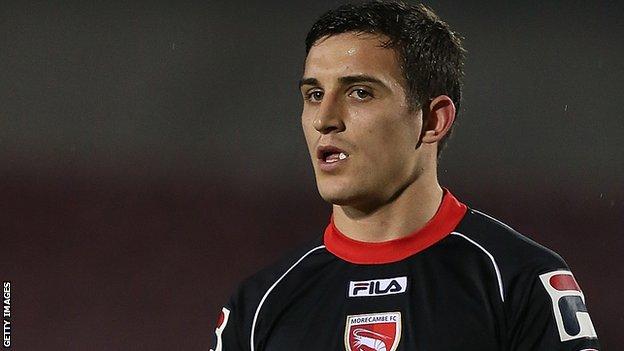 Morecambe manager Jim Bentley has said the progress made by striker Jack Redshaw warranted a new one-year contract with the League Two club.

"I know that he loves the place and I think he's improving," Shrimps boss Bentley told BBC Radio Lancashire.

"There's no doubt that he's got the ability. Look at the composure he showed for his two goals on Saturday."

Before his brace at Bootham Crescent, which took his season's goal tally into double figures, the former Manchester City trainee had failed to find the net since 8 December.

When he gets around that final third, there's only one thing in his mind - he wants to score goals

And Bentley conceded that Redshaw's form may have suffered slightly while his future was being secured.

"We'd been speaking to him for a couple of weeks, and he'll be the first to admit that his performances dipped a little bit.," he added.

"Everyone's different and some people can put it to the back of their mind.

"He's a strong-minded person. When he gets around that final third, there's only one thing in his mind - he wants to score goals. I'm pleased to have him on board."

Morecambe were in danger of being dragged into a relegation battle, but consecutive away victories at Dagenham and York have lifted the Shrimps up to the relative safety of 12th in League Two.