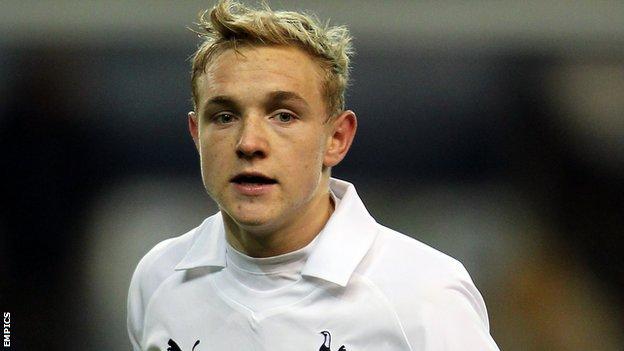 New signing Alex Pritchard is hoping he gets the chance to show Peterborough fans why he is so highly rated in the upcoming derby against Leicester City.

He told BBC Cambridgeshire: "I look to get on the ball and make things happen with goals, assists and some tricks."

Pritchard, 19, has yet to make a senior league appearance.

Alex has lots and lots of ability and potential. He is a very exciting talent

"Playing in the Championship is a case of being thrown in at the deep end, but I've been at Tottenham a long time, they've been building me up and now I'm ready to play league games," he said.

"I've just got to get on with it and do my best, but I'm looking forward to it, I can't wait."

Pritchard first came to Darren Ferguson's attention when the Posh manager saw him score four goals in 20 minutes for Spurs against Peterborough in a youth team fixture.

"I'd seen him watching, but I just got on with my game and it turned into kind of a crazy match," recalled Pritchard, who on the same day as agreeing to go on loan to Peterborough signed a new two-and-a-half-year contract with his parent club.

"I can't wait to get out in front of the supporters. I'll play where I'm put, but if I'm in attacking areas on the left, that's where I'm best. I have a lot of confidence in my ability, but whatever happens I keep trying and trying."

Pritchard has also been praised by staff at Barcelona after impressing in the Tottenham development team's eye-catching 4-1 win in the NextGen Series.

Ferguson told the club website: "Alex has lots and lots of ability and potential. He is a very exciting talent and I am delighted to have him. He can play on either wing and can also play off the front man so he can play in one or two positions for us.'