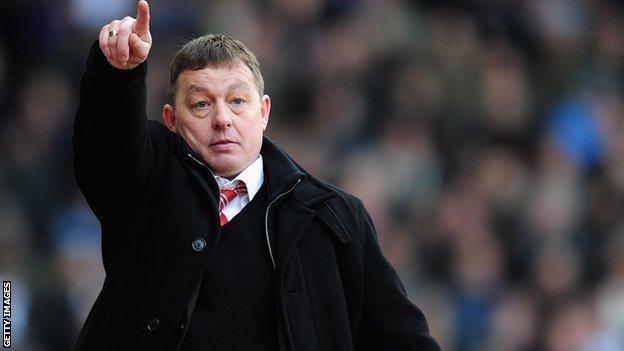 Nottingham Forest have re-appointed Billy Davies as their new manager, just 20 months after he was sacked.

Davies has signed a three-and-half-year deal and told BBC East Midlands Today he has "unfinished business" at the club he left in June 2011.

The 48-year-old Scot said: "I am delighted to be coming back to finish the task that my staff and I started. It feels like I am coming home."

Billy is a Forest legend. We know how excited he is to pick up where he left off last time and we will back him 110%

Kelly has left his role at Walsall to join as deputy manager and Darby will become first-team coach, while Pete Williams also returns as goalkeeping coach. They will all work alongside Rob Kelly, who remains assistant manager.

Chairman Fawaz Al Hasawi told the club website: "I'm delighted to welcome Billy back to our club and really look forward to working closely with him.

"Billy has unfinished business with the Reds and we know how hungry he is for success. In returning to the City Ground we believe his leadership will help us fulfil our ambition of making it to the Premier League.

"Billy is a Forest legend who needs no introduction to our loyal fans. We know how excited he is to pick up where he left off last time and we will back him 110% - this is a very exciting appointment."

Davies becomes the fourth Forest manager to work under the Al Hasawi family since they took over in July.

Steve Cotterill was sacked within two days of their arrival and Sean O'Driscoll was appointed in the summer, but then sacked just after Christmas.

Alex McLeish left Forest by mutual consent on Tuesday after just 40 days in charge and Davies quickly emerged as the overwhelming favourite to succeed his fellow Scot.

Davies took over after a return to the Championship under Colin Calderwood had produced just four league wins in 25 games. The former Derby County boss led the club to consecutive play-off campaigns, but the Scot fell out with the board because of a failure to land further targets and was sacked after a play-off semi-final defeat against Swansea City.

Davies recently held talks with Blackpool over the vacant manager's position at Bloomfield Road, but no deal was agreed and the Seasiders said on Wednesday that Davies was keen to "follow another opportunity".

Former Preston North End and Derby County manager Davies has always maintained he has unfinished business at the City Ground.

Last January, he spoke of his desire to return as the club struggled under the then boss Cotterill.

And that possibility moved a step closer when McLeish left on Tuesday.

The 54-year-old cited "a difference of understanding of the development strategy" at the club as the reason for his exit.

McLeish was understood to be angered by the club's failure to sign players during the January transfer window and refused to commit his future to the club following Saturday's defeat against Birmingham City.

But he often had a fiery relationship with the previous board during his spell in charge and left two-and-half years later.