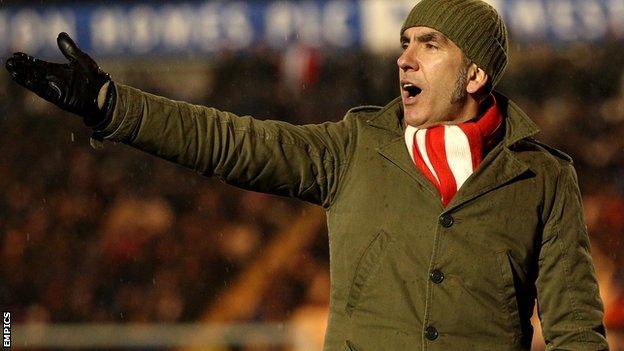 Di Canio, who said his job had become untenable on Friday, gave a statement in his post-match interview.

"I just want to say something about my players," he told BBC Wiltshire.

"This is my players' victory. Not Paolo Di Canio's. If somebody was half as committed as my players were tonight, they could be a Champions League club."

The Robins moved to within two points of the League One promotion spots with victory against the U's.

But Di Canio, who has been linked with the managerial vacancy at Nottingham Forest, was only able to name a squad of 15 for the trip to Essex, emphasising his lack of options after a frustrating January transfer window.

And the former West Ham striker when he said uncertainty over the club's ownership had made his position untenable.

The Robins avoided administration after a takeover by a local consortium last week, but the deal has yet to be ratified.

And, wary his position at the Wiltshire outfit would be the main topic of questioning after beating Colchester, he politely told journalists he would not be answering any questions.

But the 44-year-old added: "Once again we saw the fantastic work the lads did. It's not easy because we are 15 men. We made many mistakes but they are fantastic.

"So I want only to say this. Thank you to the fans. I hope they can play with 10% of what they gave today and perhaps this club can have very good health for the future and in a professional way.

"I wanted to say only a few words about my players and the fans and then stop."