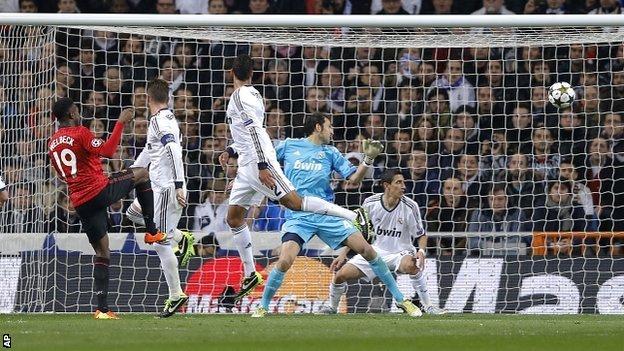 Manchester United were indebted to an outstanding performance from goalkeeper David de Gea as they came away from the Bernabeu with a highly satisfactory Champions League draw against Real Madrid.

Danny Welbeck gave Sir Alex Ferguson's side an early lead and a crucial away goal from Wayne Rooney's corner - but former United golden boy Cristiano Ronaldo inevitably responded with a classic header to draw Real level before the interval.

In an enthralling encounter that lived up to Real coach Jose Mourinho's claim that it was "the match the world wanted to see", both sides created opportunities to take a crucial lead to Old Trafford for the second leg of this last-16 tie in three weeks' time.

De Gea brilliantly turned Fabio Coentrao's shot on to the post early on and, as a tight and tense game entered its closing stages, Robin Van Persie saw his drive pushed on to the bar by Real keeper Diego Lopez and had another attempt scrambled off the line by Xabi Alonso seconds later.

United's Spanish keeper, returning to his home city after making his name as a youngster with Real's great rivals Atletico, distinguished himself with a succession of saves and a display that backed up Ferguson's claim that he is approaching maturity and growing into life at Old Trafford.

The result leaves the second leg delicately balanced but even as United took the acclaim of their travelling fans it was clear much work is still to be done before they can contemplate a place in the last eight. Real ominously illustrated their attacking riches led by the magnificent Ronaldo, who will relish his return to Manchester.

United were without captain Nemanja Vidic and it soon became clear that Phil Jones was not under orders to shadow Ronaldo, with Rooney pushed to the right flank.

"This was the meeting Mourinho described as "the match the world wants to see". The world would not have been disappointed after events in this wonderfully atmospheric arena - and the world will be only too happy to watch a second episode at Old Trafford in three weeks' time"

The tone was set for a magnificent first half as Real poured forward into attack. Angel Di Maria went narrowly wide and it took a top-class save from De Gea to touch Coentrao's low drive on to the upright.

After surviving that early pressure, United exploited Real's weakness at set pieces to secure an away goal after 20 minutes as Welbeck pulled away from Sergio Ramos to meet Rooney's corner and angle a fine header away from Lopez.

For all Real's failings at the back, they were attacking United from all angles. It was no surprise when they restored parity on the half hour - and no surprise that the source was Ronaldo.

In a moment reminiscent of his goal for United in the 2008 Champions League victory against Chelsea in Moscow, Ronaldo hung in the air to meet Di Maria's delivery and direct a header past the diving De Gea.

The celebration against his former club was subdued but this iconic arena did not hold back as his name rang around the Bernabeu.

United, however, had been encouraged by Real's defensive frailties as a stretching Welbeck almost produced the perfect response, only to direct his finish off target. Rooney then gave Real another anxious moment by shooting narrowly wide.

Mourinho was prowling his technical area throughout and responded to chants of "sit down Mourinho" from United's travelling support perched high to his right with an imperious wave.

Real maintained their impetus after the break and De Gea was in action again with an athletic stop at the far post to block Coentrao once more.

Little had been seen of Van Persie, apart from an early yellow card after a clash with Sergio Ramos, but he burst into the action and could have twice restored United's lead.

He was unfortunate as his rising shot was touched on to the bar by Lopez but he was guilty of a bad miss when he was presented with time and space in the area seconds later.

As Real waited for an offside flag that never came, the normally clinical striker miscued his shot and its lack of power allowed Alonso to recover and clear off the line.

De Gea rescued United again with 11 minutes left as Real continued to press, diving away to his right to clutch Sami Khedira's effort.

Van Persie had one more chance to snatch a win for United in the closing seconds, but his angled drive was touched to safety by Lopez.