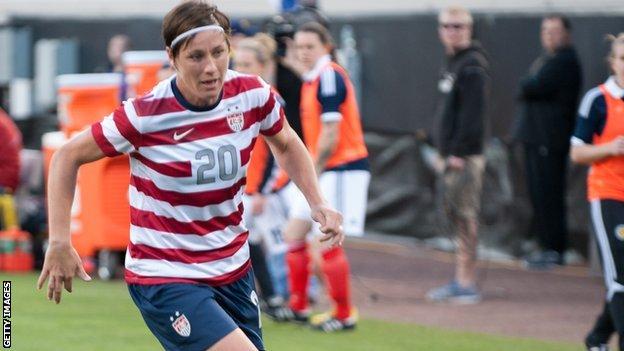 It is a simple question, an opening "how are you?" which reveals what it is like to be Abby Wambach, the Fifa women's player of the year.

Five words uttered with such energy it is no wonder former team-mate Mia Hamm once said that "every single day is high speed with Abby".

Her sunny disposition is understandable. The striker is, after all, speaking from a cloudless California and has recently returned from a 48-hour all-expenses paid trip to Las Vegas, where she "gambled some, partied some" with her family and close friends.

"We just had a fantastic time celebrating 2012," says Wambach, scorer of 153 international goals, winner of two Olympic gold medals and the first American in over 10 years, since the pioneering Hamm, to be named the world's best female footballer.

Like many athletes, Wambach had a 2012 to remember, her Fifa award a nod of recognition for scoring five goals to help the United States defend their Olympic title.

But Wambach had become one of her country's sporting sweethearts long before Britain hosted 16 glorious days of sport last summer.

Corporate America has, according to the player herself, been "salivating" over her since the women's World Cup in the summer of 2011.

"That showing from our team ignited something really special with the corporate world in the United States, and all over," says the footballer widely regarded as the best header of a ball in her sport.

Dresden's Glucksgas Stadium was where life changed for Wambach.

Ninety seconds remain of extra-time and the Americans, reduced to 10 players, trail Brazil 2-1 in the quarter-finals. They are on the verge of experiencing their earliest exit from the competition. A frustrated fan, wearing a Stars and Stripes top hat, jumps from his seat and dishearteningly waves towards the pitch. Then comes the equaliser: A last-gasp cross finds the 5ft 11in Wambach and she leaps, heading home to salvage her country's hopes.

The United States went on to beat the Brazilians on penalties and, even though they lost to Japan in the final, Wambach has been politely turning down marriage proposals, signing foreheads, appearing on talk shows and interrupted at restaurants with A-list regularity ever since.

Sleeping with her boots on

Wambach, who suffers with tendonitis, sleeps with a night splint, a medical device intended to keep the foot flexed. It is said to improve overall flexibility and decrease pain during exercise. In the morning, she slides into a set of waist-high boots which are designed to enhance circulation.

"I try to stay as humbled and grounded as possible," says Wambach, who believes being the youngest of seven ensures she does not get carried away with success.

"I don't think I'm a superstar but I do think there are millions of kids around this country that think I am and that's a responsibility I take on and hold very tightly. I don't want to do anything to tarnish that."

In over a decade as a professional footballer, the woman described by France defender Sonia Bompastor as "unstoppable" has gained a few black eyes but done little to harm her reputation.

A video, published on the American gossip website TMZ, capturing the player looking a little tipsy on a sunny New York afternoon; a pizza in one hand, a gold medal around her neck, is probably the closest she has come to attracting unnecessary attention. (Unless there are those who consider posing nude for ESPN's 'The Body Issue' a deed best avoided.)

But, then, liquor would be many a person's friend were they celebrating winning Olympic gold.

Wambach's summer exploits led former Major League Soccer player Alecko Eskandarian to suggest the powerful forward - who is nudging closer to Hamm's record of 158 international goals - could "open the conversation" for being the greatest footballer in American history.

She approaches the subject with refreshing honesty. "I know I've achieved greatness, but that doesn't mean I'm a great person," she says.

"I know I am a great soccer player, there are many on our team and many around the world. I just want people to appreciate me not only for my football but for the person I am."

Wambach is the kind of person who, last November, offered to fly a nine-year-old fan to Los Angeles to meet her after the girl, Sam Gordon, the so-called 'Utah phenomenon', became the talk of America for her achievements in an American football league played mainly by boys.

She can make such generous gestures partly because success on the pitch has allowed for a comfortable life off it.

"Coming out of college, making a bunch of money, I'm not talking about millions, but making a living out of football was a dream come true," says the University of Florida's all-time leading scorer.

"These last couple of years I've been all over the world. I rarely say no to a request. Often it is to do a clinic for a club, make speeches, or go to a hospital. Not all of it is money-earning but I really want to make a difference.

"It's been my goal throughout my career to, hopefully, leave the game better than I found it and hopefully create a life better than I used to live it and that's something I know I'm doing from both perspectives.

"It's unfortunate that we, as women, as pro athletes, are still working hard and struggling not only to survive but learning how to thrive. I don't have an answer as to why women's sports keep struggling and I definitely don't have an answer as to what the English women can do. All I can say is the things that have helped us and it's been winning championships on the international stage because that gets you seen, gets you known in the country."

"I was always told the stories from Mia [Hamm] about how they had to struggle so it's my job to relay that to the next generation of players so they know it hasn't always been this nice."

Women's football across the Atlantic, however, has had its problems.

Two professional leagues have failed. Inflated wages and dwindling attendances proving to be a bad combination. Wambach takes responsibility for the collapse of the Women's Professional Soccer league in 2012 because of the "huge role" she has in the game.

In April they will try again. An eight-team league has been launched and Wambach will wear the colours of the Western New York Flash, based in her home town of Rochester - a community bruised by unemployment but a hotbed for women's football.

It is hoped a return to the area where the five-year-old Wambach first learned to play, initially as a live-in goalkeeper for her four older brothers, will help the new league "strive and not just survive".

The Flash recorded a 20-fold increase in website activity after Wambach's homecoming was announced, which is of little surprise considering sister Laura said of life in Rochester: "instead of Kevin Bacon's six degrees of separation, it's the Wambach connection."

Wambach, though, will live in Buffalo, some 70 miles from Rochester, to shield herself from the "out of control" scrutiny which comes with being the town's "super superstar".

But for all the accolades and adoration, the striker gives the impression her legacy will not be complete until she wins the one trophy which has eluded her.

"I would give up all the personal awards that I have ever racked up. I would give up the Fifa player of the year award in order to secure a world championship in 2015," she says.

"It's been one hell of a ride. I hope to continue for as long as I can."