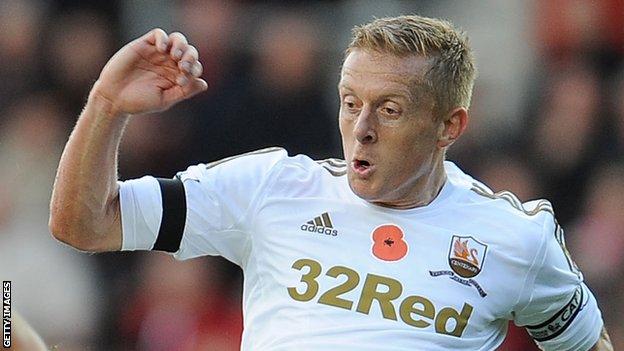 Swansea City club captain Garry Monk has signed a new one-year extension to his contract at the club.

The 33-year-old's first team opportunities have been limited this season and has been linked with a move away from the Liberty Stadium.

The former Southampton defender is in his ninth season with the club and has featured in all four divisions for the Swans.

"This club has been my life for nearly 10 years and I love it here," he said.

"My heart is here and I've never wanted to leave from the very first day I arrived.

It's hard not playing regularly, but it's something I understand

"I've had a few offers to move elsewhere this season and I've had to do a lot of soul searching to establish what's best to prolong my career.

"The club didn't want me to go, so I felt that while I am still contributing to the team - on and off the pitch - this was the place I wanted to be."

News of Monk's new contract comes after midfielder Leon Britton - another player to have featured in all four divisions - signed a new contract extension.

Monk joined Swansea from Southampton in 2004 and has played over 250 games for the club.

The defender has been limited to five Premier League appearances so far this season but acknowledges his experience is vital to the squad.

"It's hard not playing regularly, but it's something I understand,'' added Monk.

"It's the manager's decision at the end of the day and I'm experienced enough to understand that.

"But 99 per cent of managers in the league will tell you that it's also important to have experience in the squad to help the youngsters on and off the pitch.

"I believe I still have influence in the dressing room because I haven't let my standards slip.

"I still train hard and push the boys in front of me as much as I can. We are all in it together at this club and that has been vital to our success over the years."