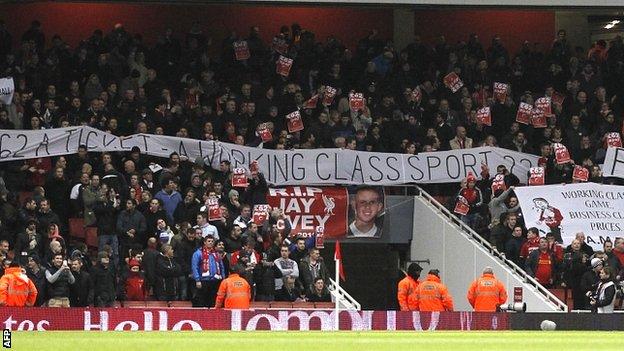 English football authorities must take immediate action to ensure fans play a key and permanent role in their clubs, MPs and supporter groups are demanding.

The sport was that unless it introduces reforms within a year the government will impose changes.

The ideas include making football grounds harder to sell off.

"Government interventions into football tend to be a bit like a minnow's cup efforts: enthusiastic, well-intentioned but futile.

"So the past does not bode well for the Culture, Media and Sport Committee's report on Football Governance, which is a shame as it is actually quite good."

Read about the CMS Committee's 2011 report

John Whittingdale, chairman of the Commons Culture, Media and Sport Committee, said there was a "huge strength of feeling" on among MPs on the issue of fan involvement.

Whittingdale's committee calling for major changes to the way football is run in England and another on 29 January, which complained about a lack of progress and warned of potential legislation if action was not forthcoming.

But Supporters Direct - which provides advice and assistance to supporters' trusts - insists neither sweeping reforms nor fresh legislation are needed for its recommendations to be met.

The ideas they want to see implemented are:

These requests were outlined during a parliamentary meeting on Thursday, attended by around 70 MPs or their representatives alongside numerous supporter groups.

"There were a lot of people there from the football family but also a lot of MPs - they recognise that football is community-based," Shadow Sports Minister Clive Efford told BBC Sport.

"The Football Association, Premier League and Football League have got to come up with a package that will engage with fans, set out a direction for football and secure football as part of our communities."

Supporters Direct says the committee, government and football authorities have agreed the three recommendations would be beneficial and achievable, so "there is no excuse" for a lack of progress.

This is the latest in a series of attempts to reform English football, but there was certainly a fresh sense of optimism in a packed Thatcher Room - especially with so many MPs present.

"That level of support is unprecedented," said Lampitt. "I'd never say I'm confident because these messages have been put forward before.

"But I do know that we've got support from all sides of the political spectrum, and I think there is a real willingness on the part of the politicians that change has to come.

"For us, it's critical that the football authorities aren't let off the hook."

He was followed by Penny Mordaunt - Conservative MP for Portsmouth North - who has been integral to to secure control of Portsmouth Football Club.

Mordaunt said she was "shocked" at the "impossible" barriers PST has faced during its takeover bid and aims to make sure other supporters' groups do not endure similar experiences in the future.

John Leech, Liberal Democrat spokesperson on sport, said "football is nothing without fans" and argued that despite the treatment of supporters improving since the 1980s, "they still get a raw deal".

Leech said "rules are needed to change the relationship between clubs and fans" and pointed to Germany, where supporter liaison officers (SLOs) tend to assume powerful positions. "In the UK, SLOs are a member of staff but don't have power," he added. "We need cultural change."

Efford added that, while owners come and go, fans have sustained their clubs for generations and will continue to do so, making it essential for them to be involved in their administration.

He then underlined the importance of "protecting stadia from predatory capitalists" and called for fan trusts to be made statutory consultees to act in the interests of communities when grounds are up for sale.

"There is an incredible feeling from supporters - they care about the clubs and their interest in the long-term health of football clubs is like no other," said Lampitt.

"That umbilical link has to be recognised in the way supporters are represented as stakeholders and in the way the game is governed. We would like to see that change sooner rather than later."