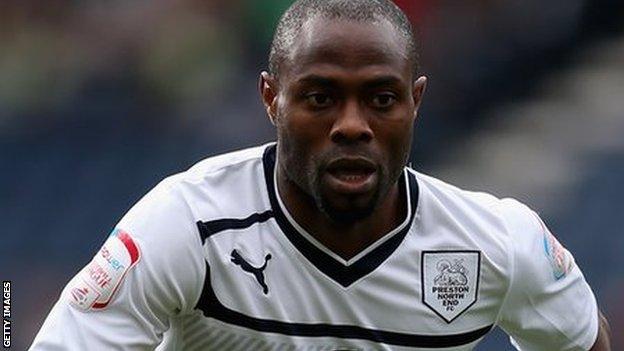 The 33-year-old scored twice to help the Iron to a 2-1 win that saw them climb out of the bottom four.

He told BBC Radio Humberside: "It was a massive result for the club, especially as it came against a team who are near us in the table.

He did actually go through me a couple of times, but it's all about us getting the win

"The other results went for us as well and all the games we have now are big ones for us."

The match saw Sodje play against elder brother Sam for the first time in his professional career.

In the build up to the game, centre-half Sam said he would treat Akpo as "just another striker" and promised to "smash him".

Despite the pre-match jibes, Akpo was sympathetic to both Sam and Pompey's plight.

"My boss told me what Sam had said and he did actually go through me a couple of times, but it's all about us getting the win," he added.

"I'm pleased for him that he is back playing again and I had a quick chat with him after the game. He's feeling good, but obviously the team are a bit down.

"I feel sorry for Portsmouth because they are a really big club and I wish them good luck for the rest of the season."

Scunthorpe, who host Crawley on Saturday, are now 20th in League One, two points above Oldham in the final relegation place.