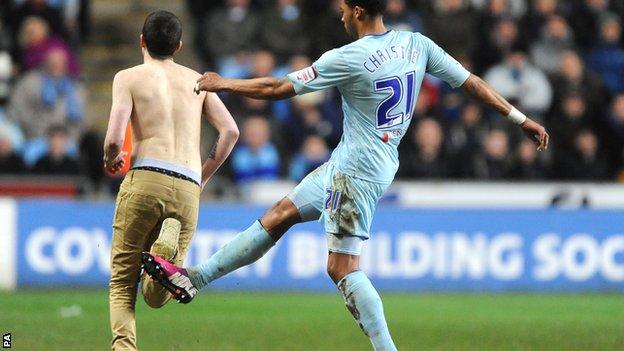 Coventry boss Mark Robins says he was confused by the decision to book Cyrus Christie for tripping a pitch invader.

After a fan ran onto the pitch in their Johnstone's Paint Trophy northern final first leg 3-0 loss to Crewe, Robins supported the City defender's actions.

"He stopped him in his tracks and waited for the stewards to remove the supporter," Robins told BBC Coventry & Warwickshire.

"To produce a yellow card for that was strange to say the least," he added.

"He's stopped the fan from running all over the place.

"He had better movement than some of our players today."

Two goals from Newcastle United loan man Brad Inman and one from AJ Leitch-Smith at the Ricoh Arena helped Crewe take a three-goal advantage going into next week's second leg.

The Alex will be looking to reach the final of the competition for the first time.