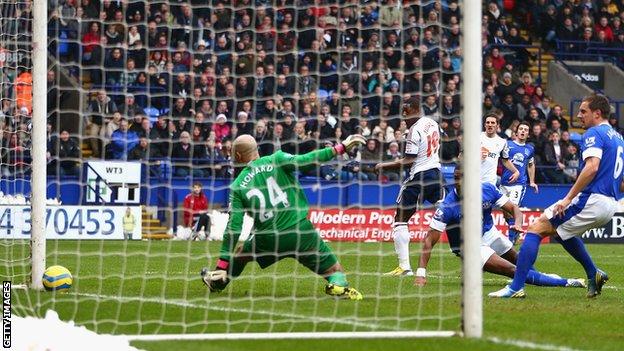 Bolton striker Marvin Sordell has said he has not been able to enjoy his recent scoring streak, as his team have been struggling to win games.

The 21-year-old has scored five goals in his last five games for Wanderers, who are 20th in the Championship.

Sordell told BBC Radio Manchester: "I'm delighted with that, but the results haven't been what we'd like.

"I can't get too over the moon with scoring goals because it doesn't matter too much if your team's not winning."

The found the net against his old club on Saturday, but it was not enough to prevent

Sordell back in form

Marvin Sordell has scored five goals in his last five appearances for Bolton, having netted just once in his first 12 games for Wanderers after joining from Watford in January 2012

Dougie Freedman's side have not registered a league win in 2013 but the Bolton boss has said he in the final three months of the season - a view shared by his in-form forward.

"We've got a very good side and we've been performing very well of late," added Sordell. "I just think we haven't had the rub of the green.

"Against Watford we had a lot of possession and just found it difficult at times to get that opportunity to score a goal. The opposition had a couple of shots and it ended up in the net.

"If we carry on performing the way we are, we're going to pick up points and push up the table."

"I can't believe this club is in the Championship," said the 25-year-old after making his debut at Watford. "The setup is unbelievable and it's obvious that this club belongs at the highest level.

"Clubs like Wolves, Birmingham and other big clubs are around us in the table. It's hard to go from the Premier League to the Championship, so I hope we can start adapting to Championship football."