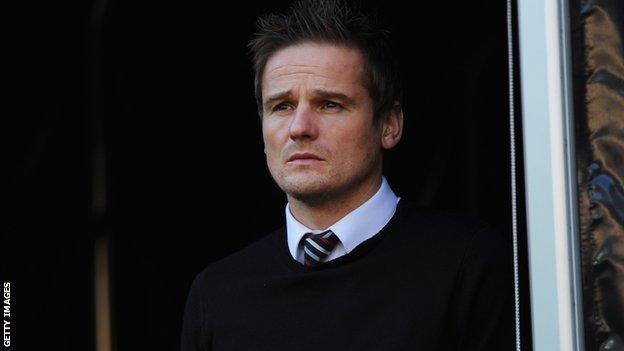 AFC Wimbledon manager Neal Ardley has urged his side to regroup after their five-match unbeaten run came to an end.

The Dons are bottom of League Two, one point below the two teams above them, after their 3-0 defeat at Port Vale.

Ardley told BBC London 94.9: "We've got to regroup, recover and make sure we go on another run."

"When you're down there it's a difficult pressure to be under but we've got to believe in what we're doing and we've got to stay strong."

We tried something, it didn't quite work and I said to the players I would take the rap

Ardley believes a change in their defensive formation was to blame for the result at Vale Park.

"They have got the best goalscoring record in the league and their front four are very potent.

"I took a calculated risk and tried to play five at the back to try and deal with their front four," he said.

"We conceded early from a set-piece, which was poor.

"It's a cardinal sin to concede from a set-piece away from home, especially against a team as good as Vale.

"After that it became tough. As the game wore on they comfortably won all their battles and it was a very difficult night.

"We tried something, it didn't quite work and I said to the players I would take the rap."

Wimbledon have a game in hand on Barnet and Plymouth, the two sides above them in the table, and Ardley is confident his squad can reach safety despite their setback at Vale.

"It's disappointing to lose the unbeaten run and we've got to react quickly. We've got to stay strong mentally.

"I've got some characters in that dressing room and I'm confident that we can pull ourselves out of it."