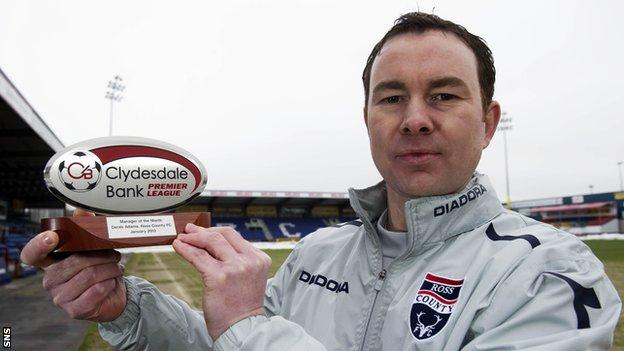 Ross County's Derek Adams has been named the Clydesdale Bank Premier League manager of the month for January.

The SPL debutants sit 10th in the table and remain undefeated since the league returned from its winter break.

County returned to action in style with a convincing 4-1 victory away to St Mirren on 19 January.

Their two subsequent matches were a 1-1 draw at Dundee United and a single-goal victory at home to Hibernian.

"It gives us recognition as a football club," he told BBC Scotland. "We've had a fantastic January after the winter break.

"And we've been able to win a few games away from home. It's been a good month."

"We're only eight points off second place and 15 off the bottom position.

"That's how tight a division it is; we're trying to stay in the SPL and do the best we can.

"We've got a good group of players who've performed well so far."