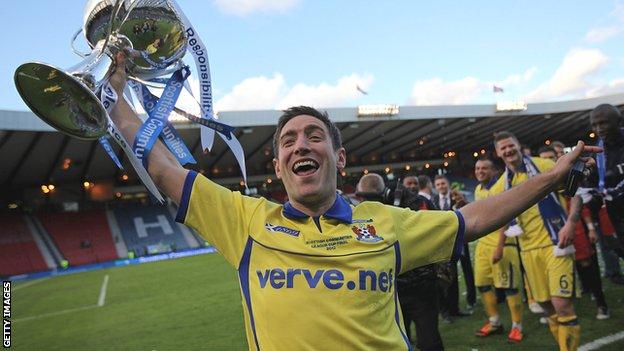 Lee Johnson has become the youngest manager in the Football League after being appointed by League One strugglers Oldham Athletic.

The 31-year-old, who has signed a two-year contract, is nine months younger than MK Dons boss Karl Robinson.

The Latics, who are 21st in the table, have been without a permanent boss since

Johnson, the son of Yeovil boss Gary, is due to come up against his father's team at Boundary Park on 16 April.

Johnson, who beat 120 other applicants to land the role, made his name as a player at Yeovil, helping the Glovers into the Football League in 2003 and then winning the League Two title two years later.

His first game as a manager will be against fellow strugglers Hartlepool at home on Tuesday.

"I'm very excited," Johnson told BBC Radio Manchester. "I'm very grateful for the opportunity and I'm willing to do everything I can to get Oldham out of their current predicament.

"I'm going to make mistakes and I'm going to learn, but what I will have is a group of players that I promise will give their best to represent me, Oldham, the staff and the fans."

Following Dickov's departure, Oldham won their first three league games under caretaker boss Tony Philliskirk, but lost their subsequent three league fixtures - including a on Saturday - to drop back into the relegation zone.

Although in a precarious position near the foot of the third tier, Oldham do have at least two games in hand on the teams above them as a result of a series of postponements and their run to the last 16 of the FA Cup.

Dickov left the club following a poor run of league form, although his departure came just a week after he had guided his side to a shock FA Cup victory over Liverpool.