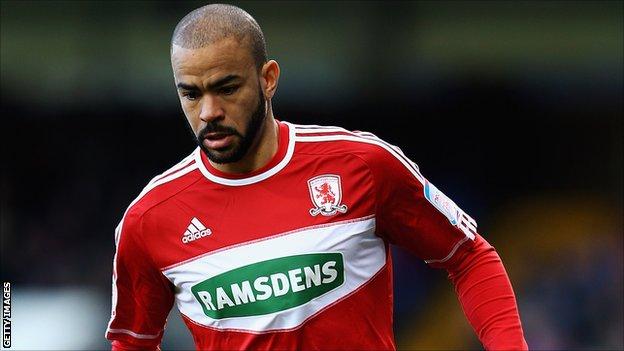 Middlesbrough winger Kieron Dyer has said his move to the Riverside suits both parties and offers no risk for manager Tony Mowbray.

Dyer, 34, has endured a tough time with a broken leg and hamstring injuries in the last six years but is on

"People have said it was a gamble, but it's not because if I don't play it won't cost them," Dyer told BBC Tees.

"If I do play well and stay fit I can help them achieve what they want to."

I knew about them, they play attractive football the way I want to and they're in a great position to kick on and get into the Premier League

One of the factors behind Dyer's decision to return to the north east, following an eight-year stint at Newcastle United earlier in his career, was the chance to be reunited with some familiar faces.

"When I left QPR, I had a few offers but as soon as I spoke to Tony Mowbray and Jonathan Woodgate I thought this was the club for me," Dyer added.

"I've known Mark Venus and the gaffer from my time at Ipswich - I played in the same team as them, which shows how old I am unfortunately.

"I knew about them, they play attractive football the way I want to and they're in a great position to kick on and get into the Premier League so it ticked all the boxes."

His debut for Boro came at his first club Ipswich Town on Saturday, where the