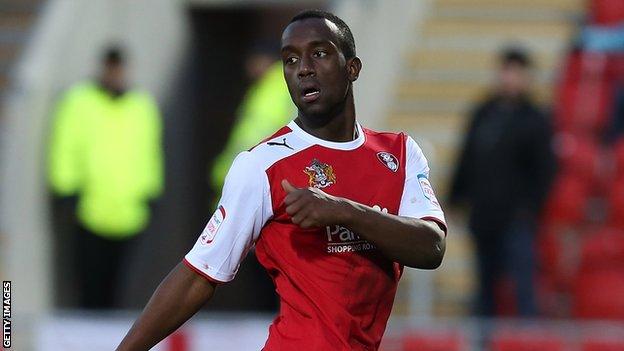 Rotherham striker Jordan Slew says he has no regrets about his decision to leave Sheffield United for Blackburn Rovers 18 months ago.

The Sheffield-born striker signed for the Millers on loan until 5 March on transfer deadline day last week.

He told BBC Radio Sheffield: "What happened happened, I'm just trying to get my head down and play football.

"You never know what would've happened if I'd stayed, but Blackburn are a great club and I don't regret going."

The 20-year-old has hardly played since moving to Ewood Park in 2011, making just one substitute appearance for Blackburn's first team.

He was on loan at Oldham Athletic earlier in the campaign and spent time with Stevenage last season.

Slew, who made his Millers debut in Saturday's 3-1 win over Northampton, admitted it had been a frustrating period and he is now desperate to get some playing time.

"There are great players at Blackburn so it just makes it harder to get game time but I'm happy now at Rotherham and want to get some games under my belt," he said.

"Hopefully we're pushing for promotion this year. I just need to work hard for the team and I'll hopefully get some goals.

"In this league, everyone wants promotion. Rotherham is a big club and if we play the way we did on Saturday there's no doubt we can go up."

The former England Under-19 international has also been impressed by the quality of Rotherham's new ground.

"I was amazed when I first saw The New York Stadium, it's incredible.

"I was saying to a friend of mine earlier that it looks like a smaller version of The Emirates," he added.