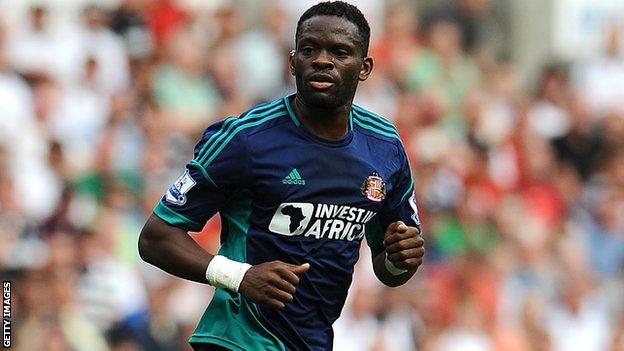 The Italian club signed the 34-year-old after Miroslav Klose was ruled out for two months with a knee injury and fellow forward Cristian Brocchi is out for the season with a broken toe.

Saha, a former France international, was released by Sunderland in January after failing to score this season.

"I am very happy to have joined this great club. I am ready to play against Napoli at the weekend," said Saha.

Louis Saha has played for six English clubs during his career - Newcastle, Fulham, Manchester United, Everton, Tottenham and Sunderland - and scored a total of 147 goals in 421 appearances.

Lazio have reached the Italian Cup final and are third in Serie A, a position that would take the club into the 2013-14 Champions League play-off round if they finished there at the end of the season.

Saha signed for the Black Cats in August after being released by Tottenham and made 14 appearances for Sunderland.

The striker, who won 20 caps for his country, arrived at White Hart Lane on a free transfer in January last year after an injury-hit three-and-a-half-year spell at Everton.

During his time at Goodison Park, he scored the fastest goal in FA Cup final history, when he found the net after 25 seconds of the 2009 final against Chelsea, although Everton lost 2-1.

The striker started his career in France with Metz and had a loan spell at Newcastle in 1999 before spending three-and-a-half years at Fulham.

He joined Manchester United in January 2004, helping the club to win two Premier League titles, but was not involved in their 2008 Champions League final victory over Chelsea in Moscow.