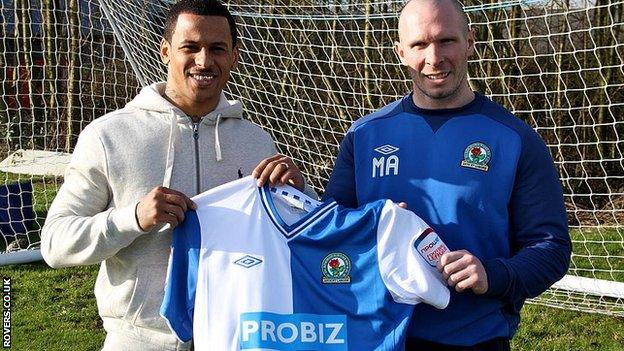 Blackburn have completed the signings of DJ Campbell on a three-month loan and Lee Williamson on a free transfer.

Rovers missed out on a permanent deal for QPR's Campbell, 31, in January.

The striker's loan deal officially starts on Saturday and he is free to face Ipswich, for whom he earlier this season.

Ex-Watford and Sheffield United man Williamson, who has signed a contract until 2014, played under Blackburn boss Michael Appleton at Portsmouth.

The midfielder featured 24 times for Pompey before

Appleton told BBC Radio Lancashire: "DJ brings goals to the squad and he's got vast experience of this level.

"Lee is not as high-profile, but he's a player I think very highly of. He's very underrated and I think he'll be a success at Blackburn.

"I want to bring players who've got a point to prove and who are desperate to be successful. DJ and Lee are certainly players of that pedigree.

Appleton added that he would be willing to allow strikers Nuno Gomes and David Goodwillie leave the club on loan, while he admitted that former Rovers and England man David Bentley is on a list of "five or six" wingers he is interested in signing.

Campbell's future has been a topic for debate since the

Hull manager Steve Bruce claimed the player was set to join the Tigers on deadline day and said Campbell walked out on negotiations.

Speaking after completing his move to Blackburn, the former Blackpool man said: "I've got nothing against Steve. He's a good guy. I'm a little bit disappointed with the way he said things because, in my eyes, a lot of it wasn't true.

"I just decided on Blackburn - that's all it was. I'm happy with my decision."