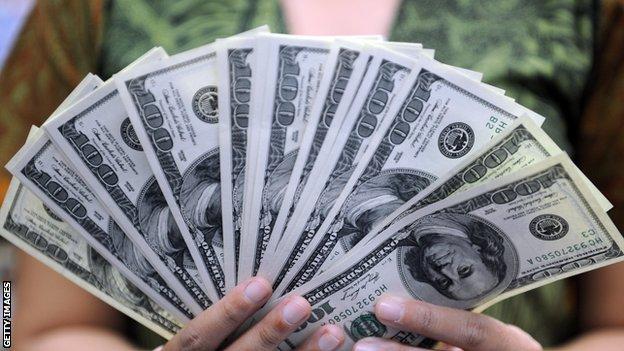 We are 48 hours on from the Europol revelations about the extent of match-fixing in Europe and beyond. So how much more have we learned and where do we go from here?

So far, the response from the football authorities has been fairly terse: Fifa and Uefa's position is that they have not seen all the documentation from Europol and are not willing to say much that is specific about the 700 or so suspicious games.

Like the rest of us, they are probably still trying to work out how much of what Europol announced on Monday is new, how much relates to already concluded cases, and whether legal action is continuing.

Defeating organised crime is clearly not the responsibility of the footballing authorities, although they are inevitably drawn into the process when it affects what they do.

They have a responsibility to investigate those who fall under their jurisdiction, like players, referees, and club officials. Europol say that might run to in excess of 400 people.

I suspect the compliance departments of both Fifa and Uefa will be swallowing hard at the thought of trying to sift through all that paperwork.

What will they do? Will they take the five most blatant examples and try to bring those responsible to account under their own rules? Will they have access to all the evidence? Is a ban from football going to make any difference to someone who might be serving a jail term already?

We must remember, too, that not all the matches identified by Europol were actually fixed. Many of them fell under suspicion, without there being proof of wrongdoing. They might have been targeted or discussed by the gangs, but in many cases they would not have actually managed to get a fix in.

I have heard and read a number of sceptical comments about the information Europol have gathered and the true extent of the problem.

But there are enough hard facts and statistics for Europol's work to re-enforce the already major concerns among the governing bodies of all sports that illegal gambling and match-fixing, are a clear and present danger to their integrity, which should not be underestimated.

The focus of Europol's investigation has been away from the United Kingdom, but throwing into the mix a suspicious Champions League game in England ensured that coverage of the wider issues will reach the headquarters of all those governing bodies, where the English language newspaper clippings and web stories are still the most widely read.

Some, like the International Cricket Council, scarcely need reminding. They were shaken by the Pakistan spot-fixing trial, not least by the revelations of how much money the illegal betting market might be worth.

During evidence, I recall one witness claiming that in one city alone, say Mumbai, up to $US250m might be bet during a single game in a one-day series between India and Pakistan.

If you don't focus on betting fraud, then you won't be able to properly address sport corruption

Those numbers dwarf the sums Europol say were wagered by the criminals they investigated. They claimed it was 16m euros bet, with 8.5m taken in profit.

The sums are not relevant per se, but perhaps they indicate the bigger rewards for corruption might lie in other sports, or at least in betting markets outside of Europe, and remind us that even relatively small amounts of money are sufficient motivation for some to cheat.

Without a hint of Schadenfreude, it is fair to say the reputation of German football has taken another dent, not long after a previous scandal.

In 2005, the German Football Federation had to deal with the impact of the rogue referee Robert Hoyzer, who, along with five other defendants, was found guilty of match-fixing and jailed.

It led to a number of changes to the rules about the appointment and assessment of match officials.

In 1971, another match-fixing scandal affected the Bundesliga, which led to nearly 60 players, coaches and club officials being punished for attempting to manipulate the outcome of games to help certain clubs avoid relegation.

This all goes to prove there is really nothing new in the world.

It is interesting too how Europol's investigation leads back to Singapore, where it says this gang operated, or was at least directed from.

Squeaky clean Singapore, with its burgeoning ambitions on the world sporting stage, hosts of the 2010 World Youth Olympics, now on the Formula 1 calendar, and currently building a new national sports hub at the estimated cost of £1bn, with the expressed intent of bringing global sporting events to the country.

Embarrassing, perhaps, to be home to organised criminals attempting to pervert sporting contests around the world?

Chris Eaton, the former head of security at Fifa and now a director of Qatar's International Centre for Sport Security, sums it all up thus: "If you don't focus on betting fraud, then you won't be able to properly address sport corruption. Sport corruption is borne of betting fraud. It's a cycle. It could just as well be betting on tiddlywinks, or on flies crawling up a wall."

There, I think, is a nail hit firmly on the head. Without concerted, joined-up action at government level to regulate the betting industry particularly in South East Asia, betting fraud is going to continue and this will not be the last time Europol lines up men in grey suits to remind us.