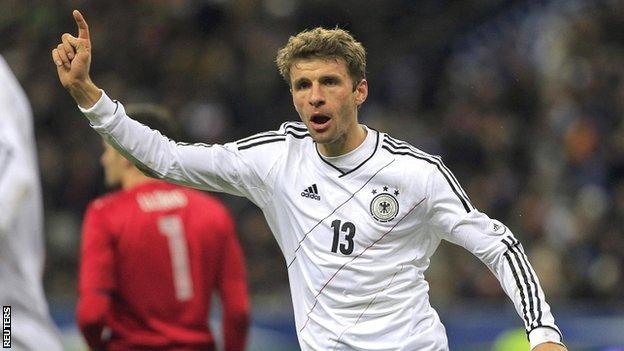 Germany came from a goal down to beat France 2-1 - the first win by a German side over France since East Germany beat Les Bleus 26 years ago.

Manchester City's Sergio Aguero scored for Argentina in a 3-2 win over Sweden.

Lionel Messi, who had scored 12 goals in his previous nine internationals, played the full 90 minutes in Stockholm, but could not add to his impressive run of international goals.

On the reached 100 appearances for their national sides, Barcelona defender Carles Puyol reached the same milestone for Spain.

The 34-year-old was replaced by club team-mate Gerard Pique at half-time as his side subdued a Uruguay front line of Suarez and Napoli's prolific Edinson Cavani.

Like Puyol, Manchester United striker Robin van Persie was given a gentle work-out, replaced by Arjen Robben at half-time of the Netherlands' 1-1 draw with Italy in Amsterdam.

The hosts had been on course for victory, but Jeremain Lens's goal was cancelled out by an injury-time strike by Marco Verratti as former Manchester City striker Mario Balotelli played the first hour of the match for Italy.

Belgium started with five Premier League players in a line-up that also featured Kevin de Bruyne, on loan at Werder Bremen from Chelsea, in a 2-1 win over Slovakia.

Eden Hazard, a current member of the Chelsea squad, opened the scoring before PSV striker Dries Mertens snatched a 90th-minute winner thanks to an assist from Tottenham's Mousa Dembele.

Portugal suffered a 3-2 defeat at home to Ecuador, former Manchester City striker Felipe Caicedo scoring the winner after Real Madrid's Cristiano Ronaldo had cancelled out a second-minute opener from Antonio Valencia for the hosts.

Helder Postiga, who spent an underwhelming 2003-04 season at Tottenham, had put the Portuguese ahead but the world seventh-ranked side folded after Joao Pereira's own-goal.