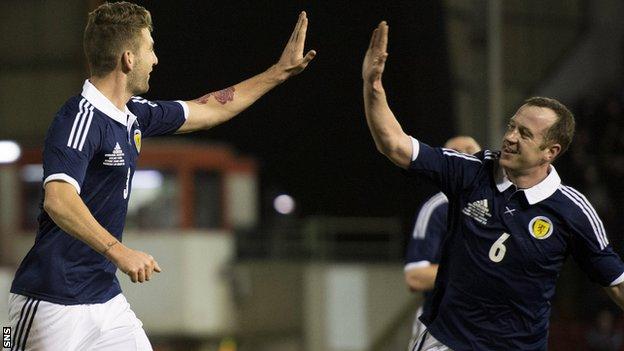 Victory over Estonia may not trigger a sudden rush of euphoria among Scotland's footballing public.

However, Gordon Strachan's bow as the national manager at least hinted that those who believe he can be the man to lift the country's fortunes are onto something.

On a difficult pitch, in pretty awful conditions, Scotland played some decent football, but most eye-catchingly, they played the match in the opposition half.

Perhaps that's to be expected against opposition ranked 83rd in the world, but it's been a while since Scotland dominated a game - friendly or otherwise - quite so convincingly.

It wasn't that Strachan's side was set up in a more attacking formation than the team put out by his predecessor Craig Levein.

By and large, there was only one out-and-out striker, with Steven Fletcher dropping off the front when Jordan Rhodes came on after the interval.

The only real difference in formation was that there was no "sitter" in front of the defence, with Scott Brown and Charlie Adam playing as conventional central midfielders, both with licence to get forward.

It might be that the players were given different instructions than under the previous regime on how to approach the game, but whatever the reason for a more attacking display, there is reason to feel encouraged about what lies ahead.

Although optimism is one thing, realism is vital.

Scotland's goal came from a free-kick and although chances were created from open play, none was genuinely clear-cut.

Far tighter defences than Estonia's will have to be breached if Scotland are to start winning competitive matches again.

But as Strachan pointed out in his post-match news conference, he has plenty of attacking options of a good standard: Shaun Maloney, Steven Fletcher, Jordan Rhodes, Robert Snodgrass, James Morrison, Steven Naismith.

And to that list, on Wednesday night's evidence, add Chris Burke.

The Birmingham City winger was an enterprising force throughout the 45 minutes he was on the park and is the kind of player the Tartan Army have been crying out for.

The 29-year-old, last capped in 2006, was full of positive running and the visitors must have been glad he was limited to a first-half cameo.

Defensively, although Scotland were sound on the night, Strachan knows the squad is weaker in that department and trying to eke out narrow victories will not work.

So, like Levein before him, Strachan got his career as an international manager off to a winning start.

Now for the hard part.