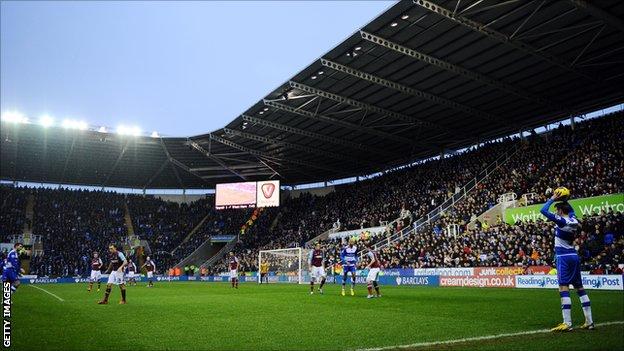 However, Sir John says the expansion will only go ahead if the club remain in English football's top flight.

The club are owned by Russian tycoon Anton Zingarevich, who has ambitious plans for the Berkshire outfit.

"We are going to apply for planning permission again for that eventuality," Madejski told BBC Radio Berkshire.

We've got a great facility here already and the more we progress the more chance we have of staying up and moving forward.

In the summer Reading returned to the top flight following a four-year absence.

Permission to expand the stadium was initially granted in 2007 but, under the approved plans, work would have to start by November 2013, a scenario which is now unlikely, given they would only decide to go ahead in the summer.

However, Madejski says they will resubmit the application.

"Everything has to be considered," added Sir John.

"It's important we get the squad right, we've got a great facility here already and the more we progress, the more chance we have of staying up and moving forward."

Meanwhile, Sir John has paid tribute to the club's manager Brian McDermott after he was named Premier League manager of the month.

McDermott was under pressure following a poor start to the season, but the club are now unbeaten in their past four league games and have climbed out of the bottom three.

"The manager has always been confident of a turnaround," added Sir John.

"We have a fantastic manager, a fantastic team and Adam Le Fondre has rightly won player of the month also.

"I have had great faith in Brian McDermott, I believe he is a superb manager, he has shown what he can do last season. Reading Football Club always punch above their level. We are a great community club, with great fans and I think it is absolutely terrific.

"Everyone supports Brian, it's a difficult time of year so onwards and upwards."