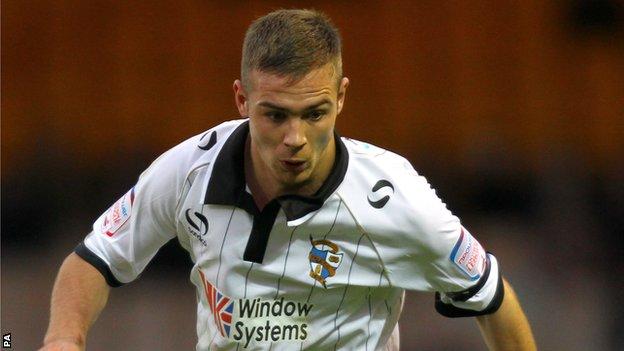 League Two top-scorer Tom Pope has said signing a contract until 2015 gives him the chance to play Championship football with his boyhood club.

The 27-year-old has scored 25 league goals so far this season, more than any other player in England.

"Leaving never crossed my mind. Hopefully we'll get promoted and do just as well next year," he said.

"The club's got the ambition to be in the Championship, signing this contract gives me the chance to get us there."

Pope was born locally in Stoke-on-Trent and joined Vale in 2011 after spells with Crewe Alexandra and Rotherham United.

He has been on target 27 times in all competitions this season and praised his team-mates for supplying him with the chances to add to his tally.

"My goals are a reflection on the team - I'm not the type of player that'll beat three men and score a thirty-yarder," Pope told BBC Radio Stoke.

"I rely on my team-mates to put balls in and around the box. Obviously me scoring so many goals is a reflection on how well they're doing."

Pope hopes his exploits this term will mean he attracts the attention of opposition defences, allowing new signing Lee Hughes, who joined the Valiants from Notts County last month, space in front of goal.

"The gaffer spoke to me last week and said when you've got someone in the form that I am, defenders start to double up on you," he said.

"I mean the goal Hughesy scored [on Tuesday against AFC Wimbledon], I had four players within two yards of me and he's in the six-yard box all on his own.

"Having two goalscorers now means if defenders put all their onus on me it'll be a fun day for Hughesy and he'll get 10 more before the end of the season."