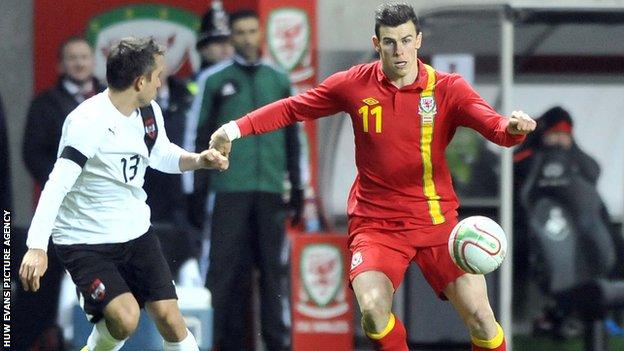 The winger scored one and created the other as Wales prepared for Group A games in Scotland and home to Croatia with a 2-1 friendly win over Austria.

"The most important thing was we put in a good performance first and the result was a positive," said 23-year-old Bale.

"It will give us a lot more confidence now going into the next games next month."

Bale's match-winning performance of power and precision drew praise from team-mates and opponents on Wednesday night as Wales manager Chris Coleman collected only a second win in his seven-game tenure.

The Cardiff-born player broke the deadlock with a drilled left-foot finish after darting past Austria left-back Markus Suttner.

That gave Bale his fourth goal in as many games, and his seventh in nine internationals.

"It was another goal of pure quality," said Joe Allen, whose lofted pass from his own half sent Bale clear for the opener. "We're privileged to have him on our side."

After surviving a few nervy moments in the latter part of the first half, Wales doubled their advantage after the break when Bale's cross was powerfully headed home by substitute Sam Vokes.

"It's obviously great to get goals but the most important thing is the team. We worked hard, performed well and the vital thing is we got the victory," added Bale.

"It's great to have Craig [Bellamy] back. I think in the first half we were probably a lot more lively. Obviously substitutions made the game a bit more dull towards the end.

"But I thought as a team we played well, not only the front line but the back line played very well, [they] were solid and we were able to see the game out in the end."

With one win from four games, Wales' hopes of qualifying for the 2014 World Cup finals from Group A are remote.

Coleman's side are seven points adrift of leaders Belgium and Croatia, who come to Cardiff in March four days after Wales' visit to Scotland.

"We know we've got an enormous task on our hands and a massive mountain to climb," said Allen of Wales' hopes of challenging for qualification.

"But while there's still hope we go into any games looking to pick up points and looking to bridge that gap between us and the two teams at the top of the table.

"This win is a step in the right direction leading into those games and more of the same as a result hopefully."