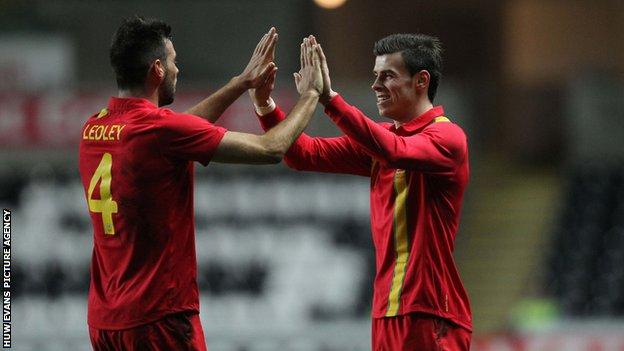 Joe Ledley says Scotland will be wary of being over-run by Gareth Bale once again when they face Wales in Friday's 2014 World Cup qualifier in Glasgow.

Bale scored both goals in Wales' 2-1 victory over Scotland at the Cardiff City Stadium in October.

Scotland claim they will not man-mark the Spurs flyer, but Ledley said: "He dominated Scotland in the last game.

"He is one of the best players in the world at the moment and they will be wary of him."

Bale has hit a rich vein of form for club and country, scoring four goals in his last four games for Wales.

He scored a brilliant 25-yard winner a minute from time to beat Scotland in Cardiff, adding to the penalty he dispatched after being brought down.

Ledley, who like Bale hails from Cardiff, is already tipping the Spurs flyer to emulate another Cardiff-born Welsh international, Ryan Giggs.

"It was an absolute honour to play with Ryan Giggs," said 26-year-old Ledley.

"They are similar players but different in a way. They are just two fantastic players and hopefully in his [Bale's] career, he can be better."

Ledley is relishing his second season in Scotland, having helped Celtic to reach the last 16 of the Champions League for the first time in five years.

The Welshman was part of the Celtic side that recorded a historic 2-1 victory over Catalan giants Barcelona back in November, but their European adventure was emphatically ended by Juventus.

Ledley is clearly enamoured with life north of the border and cannot wait to be part of the Wales side to meet Scotland in his adopted city of Glasgow.

"It's where I am living at the moment and it's going to be a very difficult game but I am looking forward to it," said Ledley.

"It's going to be without a shadow of a doubt a fantastic atmosphere, with Gordon Strachan as the new [Scotland] manager.

"We look forward to it and if we play like that, we have a good chance."