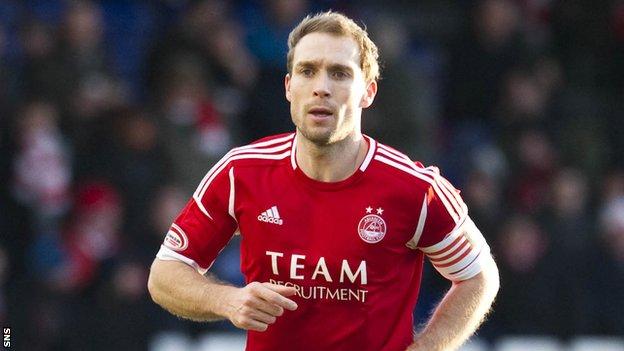 Captain Russell Anderson has signed a new deal to keep him at Aberdeen until the end of next season.

The 34-year-old is in his second spell at the club having returned following his release by Derby County in December 2011.

"I've always said the day I don't feel up for the rigours of the SPL, I'll stop there and then," he told Aberdeen's website.

Anderson added: "I'm really looking forward to at least another year playing. I started my career at Aberdeen and it's fitting that I'll finish my playing career here as well."

It's fitting that I'll finish my playing career here as well

He began his career at Pittodrie and was captain of the club for the last four of the 11 seasons he spent at the club.

After loan spells at Plymouth and Burnley, Anderson joined Derby in 2010 but his contract was cancelled by mutual consent in December 2011.

Aberdeen chief executive Duncan Fraser said: "Russell's influence both on and off the park is absolutely immense and he is a club captain in the true sense of the word.

"He has always said he wants to carry on playing for as long as he feels able to do so and everyone at the club is delighted for him."