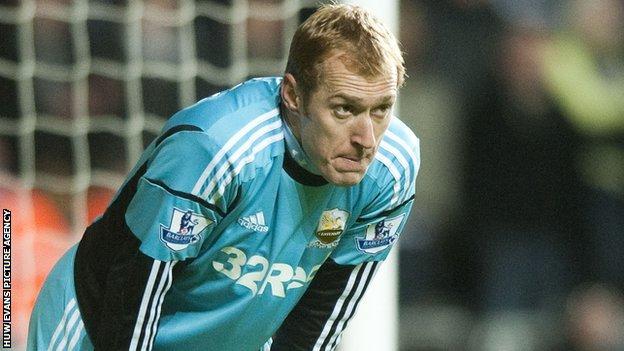 The 34-year-old is second choice to Dutchman Michel Vorm and made only a handful of appearances under ex-boss Brendan Rodgers.

But he has played 18 games under Michael Laudrup.

"The new contract is great news for me because I feel I have a lot more to give this club," said the German.

in August, 2011 having come through Bayern Munich's development system before going on to play for SpVgg Unterhaching, Hertha Berlin, Energie Cottbus and Red Bull Salzburg.

"Since the first day I joined this club, I knew something special was happening," said the German

"I have been at a number of clubs, but the feeling here between the players, staff and supporters is different.

"I feel very, very good here. Of course, last season I didn't play the amount of games I had hoped for, but this season has been a completely different story on the pitch for me.

"I have played in a lot more games and big matches against the likes of Manchester City, Chelsea, Arsenal and Liverpool to name but a few.

"I think it has been good for myself and the supporters.

"I've been able to build momentum with a consecutive run of games this season, while the fans can now see what I am capable of.

"I am contributing a lot more, which is great, and when the opportunity came along to sign a new deal here I was very happy to do that.

"The club has been on a remarkable rise over the last few years, and it really is a nice story.

"I was keen to be a part of that story."