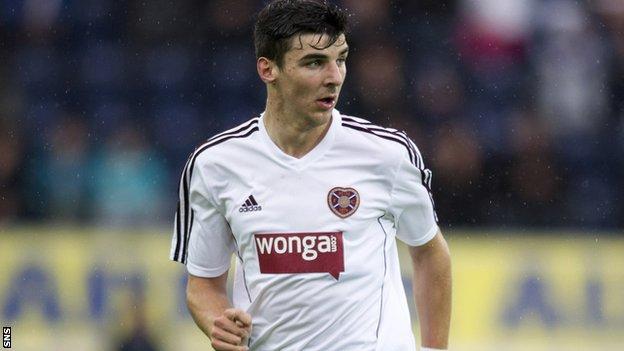 Hearts forward Callum Paterson is likely to miss the rest of the season with a foot injury.

Tynecastle manager John McGlynn confirmed the 18-year-old will have an operation on Thursday.

Paterson tore a ligament in his foot during a training session in January.

"It's devastating to have this happen at this stage of the season, especially with the League Cup final coming up and big league games to look forward to as well," Paterson told Hearts' website.

He added: "I was hoping to get a medal in my first season but it's not to be.

"I suppose that's life and these things happen in football."

McGlynn acknowledged the loss of Paterson comes as a huge blow to the Edinburgh side.

The teenager, often deployed in midfield, has been a key part of the Hearts team this campaign after progressing from their under-20 team.

He has made 27 appearances for Hearts in all competitions in 2012/13, scoring four goals.

Paterson's strike against Dundee Utd in the League Cup quarter-final was crucial in helping them progress.

He made his debut for Scotland's under-21 team in November against Portugal.