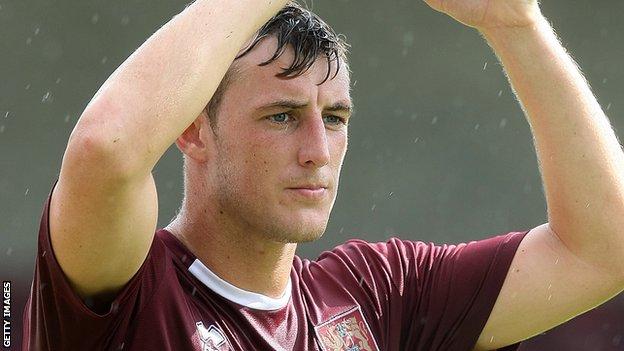 The 24-year-old has not played competitively since November after undergoing knee surgery, but returned in a friendly against Stoke on Tuesday.

Boothroyd told BBC Northampton: "I wouldn't say that we've missed him, because Ben Tozer has been outstanding.

"But he certainly makes us tougher and more aggressive and, particularly away from home, we're going to need that."

We're not ready to win away at those places, but it won't be long before we are

The Cobblers lost their last two away matches, at Gillingham and Rotherham, to fall back to eighth in the League Two table.

"It was two away games against two of the most fancied sides [for promotion] and our expectations are up," continued Boothroyd.

"We're not ready to win away at those places, but it won't be long before we are.

"At the start of the season, would we have taken the points we've got, eighth place, one point off the play-offs and four points off automatic promotion? I know I would've done. But we always want a bit more."

The 24-year-old also featured in the practice match against the Potters.

"I like Lee," added Boothroyd. "If you're going to be successful and get out of the league you're in, you've got to get players in who are better than the level you're at.

"Lee certainly is that. We'll be looking to do something with Lee in the next couple of days."