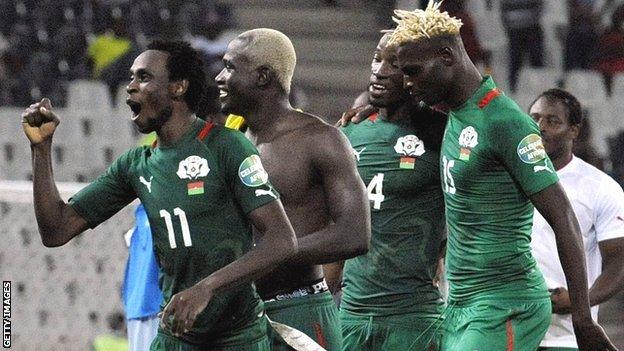 Burkina Faso's Jonathan Pitroipa has been cleared to play in the Africa Cup of Nations final against Nigeria on Sunday after his ban was rescinded.

Referee Slim Jdidi admitted that he mistakenly issued the winger with a second yellow card for simulation in the semi-final against Ghana.

The Confederation of African Football (Caf) confirmed on Friday that the resulting ban would be overturned.

Jdidi has already been suspended for his performance in the semi-final.

A senior Caf official told Reuters: "The referee wrote the letter to the review committee saying he had made a mistake.

"The review committee examined footage of the incident and agreed Pitroipa had been fouled.

"It asked the disciplinary committee to verify its decision, which [it] is entitled to do under the terms of Caf's rules and regulations."

"We are all very happy with the decision, he is a very important player for us," Nacoulma told BBC Sport.

"We are very motivated to win. We have no injury concerns for the final."

The Stallions will play in their first Cup of Nations final, while Nigeria are seeking their third continental title.

Pitroipa, who plays for French side Rennes, will be a key player in Paul Put's side, who are missing top scorer Alain Traore.

Striker Traore scored three goals in the group stage but suffered a thigh injury in the final group game against Zambia.

Pitroipa was shown a second yellow card in the final minutes of extra-time against Ghana by Tunisian official Jdidi, earning a caution for simulation even though John Boye appeared to trip the Burkinabe inside his own area.

Shortly after the match, which Burkina Faso won after a dramatic penalty shoot-out, officials from the West African nation made an official protest about the referee's performance to African football's ruling body.

Caf President Issa Hayatou admitted earlier on Friday that refereeing mistakes had been made at the tournament.

"Overall we are satisfied but we experienced some mistakes with the referees especially at the semi-final between Ghana and Burkina Faso, and there were other errors too at the Tunisia v Togo [group] match," he said.

Caf Secretary-General Hicham El Amrani, meanwhile, told a news conference in Johannesburg on Thursday that his body was unhappy with the standard of officiating in the Nelspruit semi-final.

Jdidi infuriated Burkina Faso when not only sending off Pitroipa after he had seemingly won a penalty but also awarding Ghana a debatable spot-kick themselves, before disallowing a legitimate-looking Stallions goal.

"We would have expected a better standard," El Amrani said.

Already missing the injured Traore for the first Nations Cup final in the Stallions' history, the absence of key man Pitroipa, who scored the match-winner in Sunday's quarter-final win over Togo, would have been another major blow for the Burkinabe.

Prior to these finals, the Stallions had failed to win a match at the Nations Cup on foreign soil, having reached the semi-finals when hosting in 1998, but they now stand on the verge of their greatest triumph.