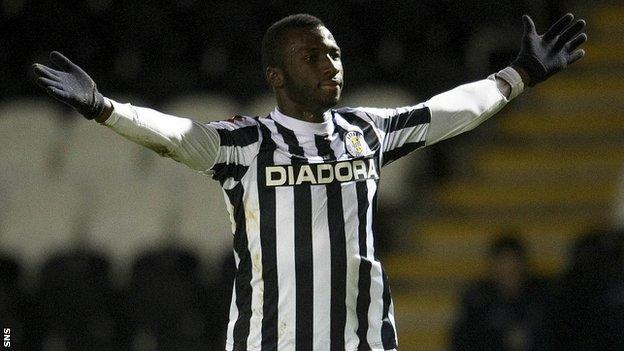 Aberdeen manager Craig Brown has highlighted the threat posed by Esmael Goncalves ahead of St Mirren's visit to Pittodrie on Saturday.

Saints have won their last three games, with the Portuguese striker scoring four goals in the process after joining the Paisley side in January.

"Three good results and a good new loan signing in Goncalves, who's scored in every game," Brown said.

They're a team of good threat from middle to front

"I've only seen him on tape but we'll see him in the flesh on Saturday."

He added: "He's come into the Scottish Premier League in the same manner as [Henrik] Ojamaa did last year and has sparked St Mirren into a real threat.

"Ojamaa did it for Motherwell last year and was an inspired signing."

However, Brown was also quick to acknowledge there are several other Saints danger-men the Dons will have to keep an eye on.

"Kenny McLean is an outstanding left-footed midfield player," he said.

"Paul McGowan's playing very well and Gary Teale can get down the side and deliver.

"They're a team of good threat from middle to front and big Steven Thompson's one of the best finishers in the SPL.

"So we're well aware we have a game on."

When the sides last met in the SPL, Aberdeen finished comfortable winners in a 4-1 victory at St Mirren Park.

But the Dons suffered a blow on Sunday by being knocked out of the Scottish Cup by Hibernian.

"After you lose a game like that, you want to redeem yourself as much as possible," Brown said.

On Friday, Aberdeen captain Russell Anderson signed an extension to his contract which will see him remain at Pittodrie until the end of the 2013/14 season.

Brown described retaining Anderson for an extra 12 months as a "great bit of business" for the club.