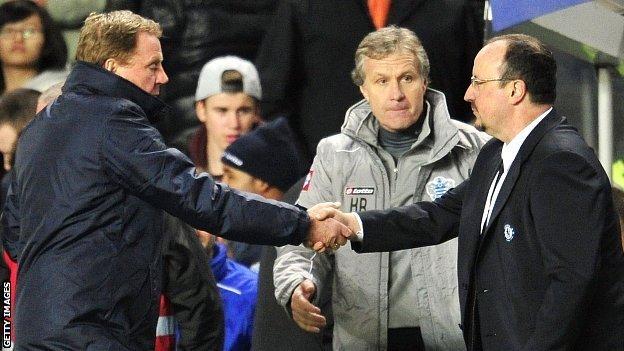 However, 19 of the 29 changes in full-time managerial positions during the current campaign have been followed by a rise in the number of points per game won.

The trend is even more pronounced when a club has chosen, rather than been forced into a change of boss.

Howe returned to the Cherries and and has won 41 points from 18 matches since - a return of 2.27 points per game.

At the bottom end of the table, Mark Robson's solo spell at Barnet, before is the worst managerial spell.

Robson is the only manager below former QPR boss Mark Hughes in the table. Hughes left Loftus Road having won just 0.33 points per game this season.

The Welshman was replaced by Harry Redknapp who has returned 1.08 points per game in an apparent vindication of chairman Tony Fernandes's decision.

Paul Hart, currently youth academy director at Charlton Athletic, has had spells in charge of Portsmouth, QPR, Crystal Palace and Swindon over the past five seasons.

He said: "There are too many knee-jerk reactions to results. I think that longevity is ultimately the answer to success.

"People will say I would say that because I am a manager but I have experienced it both ways - coming in half way through a season and leaving halfway though a season.

"There can be a quick turnaround in results when you bring in a new man, but is that maintained? I think that it is often a step forward but two steps back.

"Ultimately a football club needs to look at itself and be realistic in its aims and objectives."

However, QPR's west London neighbours Chelsea have slipped off the pace at the opposite end of the Premier League table after swapping Roberto Di Matteo for Rafael Benitez in their dugout.

Di Matteo, whose failing in the Champions League may have proved his undoing, was sacked with his side four points off then-leaders Manchester City.

That gap from the top has increased to 16 points under Benitez, who has delivered 1.69 points a game - down from Di Matteo's two points a game.

Almost two thirds of instances however have followed the trend set by Redknapp rather than Benitez.

And in the 22 cases where a club has actively chosen to change managers, rather than their boss leave, on 16 occasions, or 73% of the time, a the team has then accumulated points at a faster rate.

The biggest improvement has come under Howe whose return to Bournemouth has seen the club rise from 16th to fourth.

Blackburn's decision to appoint Henning Berg in the wake of Steve Kean's departure has done the most to hinder a side's momentum with Kean's two points per game slowing to 0.6 under the Norwegian before his dismissal after 57 days in charge.

Pat Nevin has experienced a change of managers from both the dressing room and the board room.

"There often is a dead-cat bounce," he told BBC Sport.

"If you change it around and bring in someone to have a fresh look around that can have an immediate effect.

"In the simplest terms, for an individual player all bets are off again. You start from scratch with a new manager and you need to redouble your efforts to impress him.

"Their spirits are immediately lifted and overall it is a psychological positive.

"I think I was a hell of a lot more reticent that your average chief executive - I only made one change [sacking Billy Davies in 2001] in my four years in charge.

"Every club is different and has a different view, but it is incumbent on you sometimes to take a decision that may not be very popular.

"You may not even really want to take it, but if you truly believe it is for the good of the club long term then you have to make that decision."

The , featuring every club in England's top four divisions, is available on a separate page of the BBC Sport website.

Figures correct as of Thursday, 7 February.