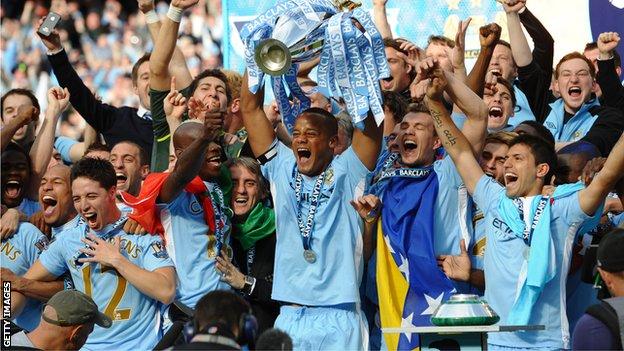 The Premier League says its clubs will be punished with a points deduction if they breach new spending controls.

Each team will not be allowed to make a total loss of more than £105m over the next three seasons and must limit their player wage bills from next season.

"If people break the £105m we will look for the top-end ultimate sanction range - a points deduction," said Premier League boss Richard Scudamore.

One thing that's been guaranteed in the unpredictable world of Premier League football is that when TV revenues go up, so do the financial rewards to players.

It was many people's assumption that the astounding sums agreed by Sky and BT for the live rights for the next three seasons would result in another ticket to El Dorado for the current crop of playing talent.

However, against the run of play, the clubs have shown signs of self restraint. Could sustainability become the new spend spend spend?

In theory, these measures will present clubs with an opportunity to pay down some debt, secure a more stable financial platform, and even stick something away for a rainy day. Now that would be an interesting development.....

The rules are designed to improve the financial sustainability of clubs.

Investment in areas such as stadia and academies will be exempt.

The aim is a 'break even' model similar to the Financial Fair Play regulations introduced by Uefa for sides in European competitions. The FFP allows only a £38m (45m euros) loss - significantly less than the Premier League's new limit of £105m between 2013 and 2016.

Agreeing to cost controls marks a major change for Premier League clubs - they made cumulative losses of £361m in the 2010-11 season - and Scudamore is adamant the system will be enforced.

"As with all things in our rulebook, you will be subject to a disciplinary commission," the Premier League chief executive warned clubs.

"Normally we stay silent on sanctions as the commission has a free range but clearly if there is a material breach of that rule we will be asking the commission to consider top-end sanctions."

Scudamore confirmed there would be an "absolute prohibition" on teams reporting losses of more than £105m over the next three years, with the first sanctions possible in 2016.

Of the 20 top-flight sides, only Manchester City, Chelsea and Liverpool have reported losses of more than £105m over the last three years, according to the most up-to-date published accounts.

It emerged that the vote for the financial regulations could hardly have been closer with only 13 of the 20 clubs voted in favour, with six against and Reading abstaining.

The 'yes' vote only narrowly achieved the necessary two-thirds majority of the 19 votes cast.

It is understood that Fulham, West Bromwich Albion, Manchester City, Aston Villa, Swansea City and Southampton all voted against. Chelsea, who had initially been viewed as opponents of financial fair play regulations, voted in favour.

"A new owner can still invest a decent amount of money to improve their club but they are not going to be throwing hundreds and hundreds of millions [of pounds] in a very short period of time," said Scudamore.

"While it has worked for a couple of clubs in the last 10 years, if that's going to be done in the future it's going to have to be over a slightly longer term without the huge losses being made.

"I think at £105m you can still build a very decent club with substantial owner funding but you have to do it over time, not in a season."

Any club making a loss of above £5m a year will have to guarantee those losses against the owner's assets, which should help prevent the situations that afflicted Leeds and Portsmouth.

"In some ways that's the most significant part, this is a three-year rolling system of secure funding - it's one year at the moment," Scudamore added.

However, that only applies to revenue centrally distributed by the Premier League - essentially TV income - and does not cover extra money coming in from increases in commercial or matchday income.

West Ham's co-owner David Gold said that the proposals for controls had received backing of the majority of chairmen.

"We have all voted and it was overwhelmingly supported, not by all the clubs - some are a little concerned - but the vast majority of the clubs voted in favour," he explained.

"We have got restraint, that's the important thing. What's driving the whole thing is we've got to avoid another Portsmouth."

Minister for Sport Hugh Robertson commented: "I am pleased that Premier League clubs have agreed further financial regulations that will help ensure they are run on a more sustainable basis.

"The Government has been clear that we want clubs to be on a secure financial footing for the long-term health of the game. This is a welcome and positive move."