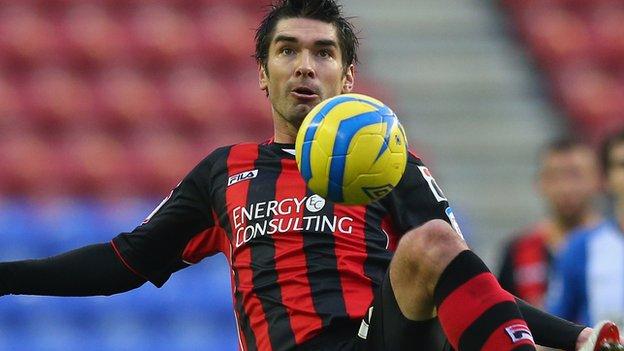 Ex-Portsmouth midfielder Richard Hughes says he is saddened by the club's current plight ahead of this weekend's south-coast derby at Bournemouth.

Hughes, who is now with the Cherries, spent nine seasons at Fratton Park.

"I think everyone in football is saddened by the events over the past couple of years at Pompey," Hughes told BBC Radio Solent.

"Especially someone who has a close affinity to the club and who spent nine good years of their career there."

Portsmouth have been in administration since February 2012 and are said to be £61m in debt.

They are currently the subject of rival takeover bids from the Pompey Supporters' Trust and a consortium led by Keith Harris.

The football club continuing to exist is the main thing. It is a fantastic football club, followed by some of the best supporters in the country

The club are also facing a second-successive relegation and have a 10-point penalty from the Football League to come.

"It is very sad and it is something where you want to hear positive news," 33-year-old Hughes added.

"You want something to be concluded once and for all and for the benefit of the club's supporters."

Hughes, who revealed he is still owed money by the club, says he is aware of the rival bids and believes the supporters' trust should be given the opportunity to run Pompey.

"It is difficult not to have an opinion when you are still owed money," he added.

"We made compromise agreements, it's not a trivial amount of money, but it is something that goes hand in hand with the survival of the club.

"It's an ongoing situation and has been for two and a half years. The football club continuing to exist is the main thing. It is a fantastic football club, followed by some of the best supporters in the country.

"I understand there are a couple of bids in place for the club at the minute. My personal take would be if the supporters could own the football club and play a major part in the way it was run, then the problems they encountered a couple of years ago wouldn't happen again."