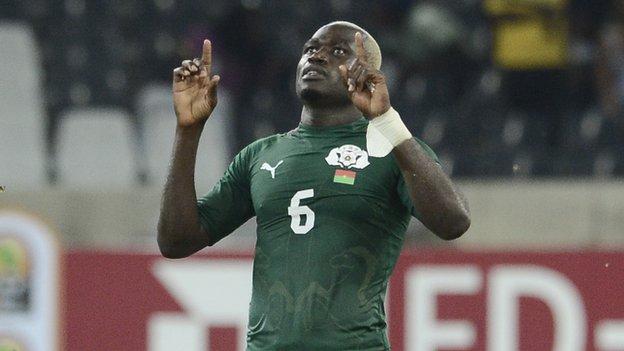 Burkina Faso's Djakaridja Kone paid tribute to his side's work ethic after they reached their first Africa Cup of Nations final with victory over Ghana.

The Burkinabe fought back from a goal down to reach Sunday's showpiece game in Johannesburg against Nigeria.

"I am so happy. It is 15 years since we got to the semi-finals, nobody believed in us, but we worked very hard and now we are in the final," said Kone.

"We have 90 minutes to achieve something historic," he told BBC Sport.

I am confident we can win the cup

The Stallions defeated Ghana's Black Stars on penalties after an incident-filled semi-final ended 1-1 after extra-time.

"Our defence was the difference against Ghana. We knew it would be a hard game, so we played hard and gave it our all.

"But you see we can also play nice football and we are very happy."

Kone admitted there would be "some celebrations" after their achievement but insisted the team would soon "prepare for the game against Nigeria".

He added: "The final will be very tactical, Nigeria are a very good team. We already played against them (in the group stage) and we drew 1-1.

"Nigeria will have a lot of confidence after their win against Ivory Coast. But we also have a good team and good players, so I hope we can win."

After five games on a woeful pitch in Nelspruit, Burkina Faso will finally get the chance to play on a good surface when they face Nigeria in Johannesburg, which hosted the World Cup final three years ago.

Kone believes it can only help his side and also feels they can overcome the loss of injured striker Alain Traore and Jonathan Pitroipa, who was harshly sent off against Ghana and is suspended.

"It will be difficult for us because we are without Alain Traore and possibly Jonathan Pitroipa, but this is football - we are professionals and we have players who can come in.

"I am confident we can win the cup - we will work hard and hope to bring the cup back to Burkina Faso."

The Stallions have never reached the Nations Cup final before, but did reach the semi-finals when hosting the competition in 1998.